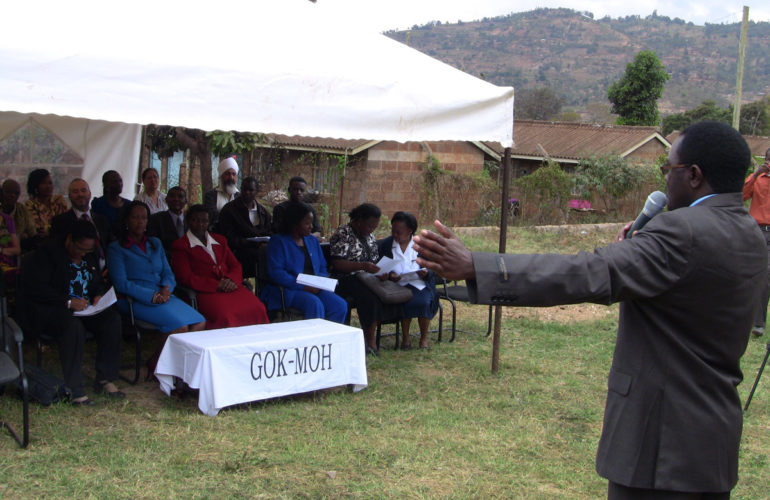 When a woman is diagnosed
with cancer, it is normal for close family members to be affected in one way or
another.

Family members may
experience similar emotions as the patient that includes sadness, shock, and
anxiety. These emotions may affect colleagues at work and friends too.

Statistics indicate that
about 70% of all cancer cases are diagnosed too late in low and middle income
countries.

The World Health
Organization estimates that every year in Kenya more than half of the 2,500
women diagnosed with cervical cancer die from the disease.

According to the Kenya
Breast Health Program, 95% of women in Kenya have never had a clinical breast
examination due to scarcity in screening mammography in the country.

In Machakos County, lack of cancer awareness
among residents has led to unnecessary suffering to patients and their
families and this is replicated across the country.

Breast cancer survivors
have narrated how it takes months of investigation to confirm a suspicion of
cancer and the discouragement they get from colleagues to undertake treatment.

One survivor in Machakos
County shared how she underwent mastectomy and later referred to Kenyatta
National Hospital (KNH) for chemotherapy and radiotherapy. Her friends
discouraged her from undertaking chemotherapy due to its side effects but she
forged forward.

“I lost friends because of
my sickness. Cancer awareness needs to be introduced in school for early detection
to save lives and families,” said the breast cancer survivor.

Palliative care plays a major
role in supporting women with cancer and other distressing symptoms including
support to family members.

Head of Machakos Palliative
Care Unit Mr. Elijah Musau reports that the unit recorded 47 cases of cancer of
the cervix and 40 cases of breast cancer in 2013.

Being a district hospital,
this means 87 families are in one way or another suffering as a result of
having a woman diagnosed with cancer.

Besides breast and cervical
cancers, 16 cases of abdominal malignancy, 15 cases of cancer of the ovary, 11cases
of prostate among others were reported. This means an additional number of
women with cancer.

In 2013, she ran a campaign
that saw over 2500 women screened for cervical and breast cancer. 8% of those
screened had suspicious lumps and lesions and were referred to facilities for
further examinations.

“When a woman is affected
by disease, the entire family suffers a big blow since women play a vital role in the family.” Says Dr Ng’ang’a.

She encourages stakeholders
to come together and fight cancer in Machakos while indicating that she is in
touch with possible donors to support the County hospitals manage cancer.

Gynecologist consultant Dr
Norris Onzere challenges local companies to know that they have a corporate
social responsibility to support the community including treatment of life
threatening illnesses, cancer being the leader and as a result save many
families.