Comfort and Care Through Thick and Thin 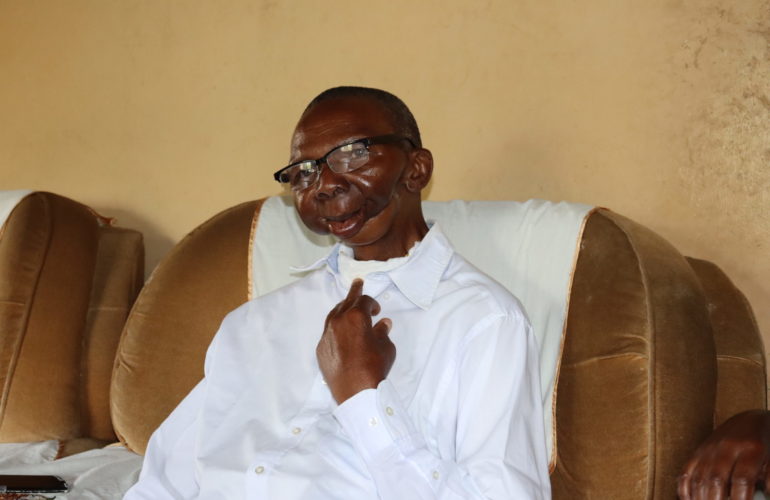 “The cost of treatment was not cheap. This condition affected the whole family. It has been a struggle for the children as well because they were still living with us under our care when the challenges began. Things have not been easy and our circumstances have not been ideal.” Mrs Esther Situma.

Mr Vitalis Situma and his wife Esther Situma live at Moi’s bridge in Uasin Gishu County. We met with the team at Eldoret Hospice before we proceeded to the Situma’s family home. We drove 50 kilometres from Eldoret town. We took a turn from the main road and we drove through a stretch of murram road to get to their home. We got to our destination and we found a calf, Valentine (born on Valentine’s Day) grazing in the compound. We were greeted by the Situmas and they welcomed us to their home. 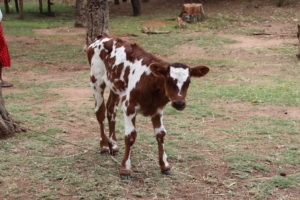 Miss Valentine at the Situmas compound 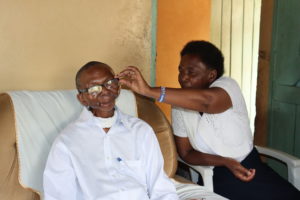 Mr and Mrs Situma in their home

Mr and Mrs Situma met when they were young and they had a fairly normal life until unexpected events turned their lives around. Mr Situma is a retired teacher and preacher. Together with his wife Esther, they have seven children and ten grandchildren. The unfortunate incidents began in the year 2000. “He complained of pain in his tongue. I thought he had bit his tongue or he kept biting it. We went to Kitale and the doctors saw he had a swollen tongue. The doctor said it did not look good.” Said Mrs Situma.

“The doctors prescribed medicine but there was no improvement. We decided to go to Eldoret for treatment and we were referred to Nairobi. He was diagnosed with cancer of the tongue and he had to undergo an operation and we were discharged after a successful operation.” Said Esther.

After some time, cancer had spread and Mr Situma had to undergo another surgery to remove the lymph nodes. “My husband underwent radiotherapy after the surgery and the side effects made him turn dark.” Said Esther.

“One day when Vitalis was in the bathroom one of his veins burst. He bled so profusely and the blood was coming from his mouth. We went to the hospital immediately and he needed a blood transfusion because he had lost a lot of blood.” Said Esther. 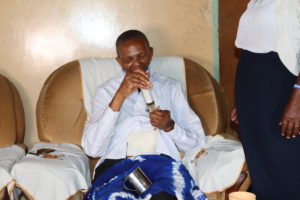 Mr Situma feeding through his tube with a syringe

Mrs Situma adds, “In the year 2004 Vitalis’ chin developed a hole. The condition got worse and in 2006 he could not eat. I would prepare porridge for my husband and as I fed him, some of the porridge would pour from his mouth through the hole in the chin. He was not feeding properly and an operation needed to be done to fix a feeding tube to his stomach. He feeds on blended food through his tube with the aid of a syringe.”

Esther adds, “In the same year, we went to a doctor for consultation and he was unprofessional. He stepped out and spoke to his colleague disclosing my husband’s condition. He described it as a hopeless state. We felt very discouraged and the next morning my husband invited his brother over. I found my brother-in-law crying. He said Vitalis told him it is over and there is no hope for him.”

“That is when one of our friends restored our hope by referring us to Eldoret Hospice. After the skin grafting surgery, I took my husband to the hospice. They gave us medicine for pain relief. To this day he uses prescribed medicine from the hospice which he takes six times a day so he can be calm. The side effects are heart palpitation and dizziness. He needs care. I attend to him and when I am not home, my daughter takes care of her father.” Said Mrs Situma. 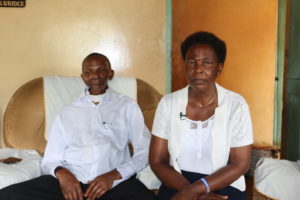 The Situmas in their home

“In 2018, he developed respiratory complications. It’s not been easy. We have been married for 44 years. The first 20 years of our marriage were normal. We had hopes and dreams just like any other couple and family to live a normal life but we have to accept God’s will.” Said Mrs Situma, a preacher by profession.

“Life has not been easy. Over the years, we have sold livestock and property like land. This has affected the family so much. We have friends like Eldoret Hospice who give us the much-needed medicine for free. I have used the National Health Insurance Fund (NHIF) many times but at the moment, I can’t afford to pay the monthly fee. We have many competing needs. Our children support us to the best of their ability.” Said Mrs Vitalis.

“We communicate very well. I understand him when he wants to say something and what he says even though he can’t speak because of the many surgeries and extractions including most of his tongue.” Said Esther. 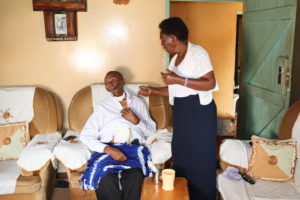 Mr and Mrs Situma speaking to each other

We asked Mrs Situma to speak to her husband and she asked him a question, “what would you like for dinner?” To which he responded, “Anything you would like to cook is fine with me.”

Eldoret Hospice not only provides the much-needed medicine, but they provide counselling and psychosocial support to the Situmas. The efficient and effective team of just a few staff make the 50 Kilometre trip every fortnight and sit with the family and share their day to day challenges and Eldoret Hospice assists the best way possible. 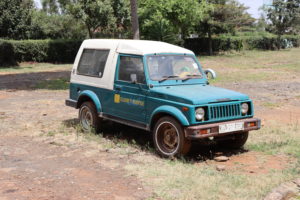 The hospice would love to do more and also make the trips more frequently but they are limited due to a lack of adequate resources. The car they use to travel to such locations is also old and worn out. The hospice is keen to ensure that palliative care services in Uasin Gishu County are available to all in need.