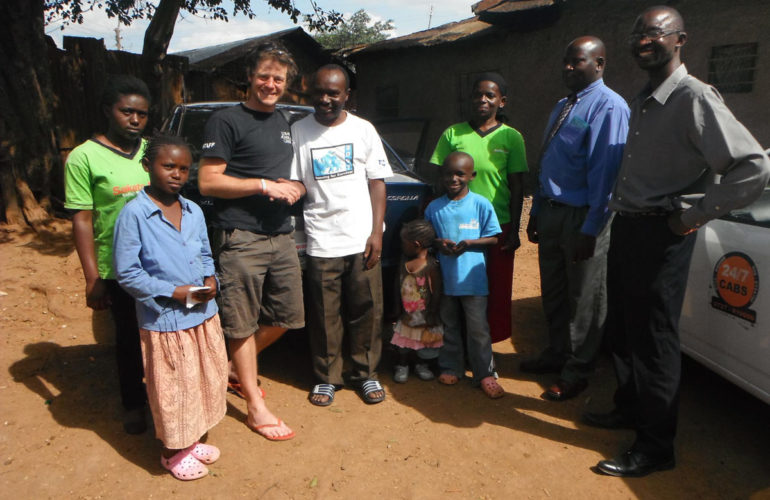 On his day two journey within the Kenyan borders, Russel Johns made a visit to Kibera slums accompanying Nairobi Hospice to conduct a home visit.

He also made a stopover at Kenya Hospices and Palliative Care Association (KEHPCA) offices before proceeding with his visits.

This is the second hospice in Kenya Russel has visited in his quest to understand, raise awareness and generate funds for hospices in his solo bike journey across Europe and Africa.

He met 43-year-old Fredrick Ikutwa, a patient whose care is provided by Nairobi Hospice.

Fred Ikutwa has been a patient of Nairobi Hospice since the year 2002, a time when he could not walk due to his condition.

Ikutwa had been having wrong prognosis before then until a sister from a community hospital in Kibera, one of the largest slums in Africa, who introduced him to Nairobi Hospice.

“At the time I could not walk so the doctor had to come over to my house to check on me and give me medicine after being diagnosed with Kaposis sarcoma.” He narrated.

He said he is also living positive on Anti-retroviral and he has seen a lot of change that he never imagined could come his way.

“My friends and other family members ran away from us when they heard I had cancer because they thought I would ask cash from them which could either way go to waste. Their understanding is that anyone with cancer is a dying person hence no need to spend money on them.” He said.

He advises people not to look at cancer as a death sentence but an illness that can be managed if proper treatment is sought from qualified medical practitioners.

“It is God’s choice for one to die and when your day comes, it does not matter whether you are sick or not, you will have to die.” He said.

Ikutwa urged those who have ailments that they feel are not treatable to seek medical intervention and stop fearing what people will say, as this will help them overcome such illnesses.

He said that he vested his hope with his family who remained loyal and kept his faith strong in fighting the illness.

Ikutwa has a family of four children, three daughters and one son, whom together with his wife have continually given him the support he needs to live strong.

His wife, Maximillan Ikutwa, says at the initial stages, they did not know Nairobi Hospice existed but through a friend, his husband has gone through tremendous improvement.

“I used to help in bringing the drugs home from the hospice as he was bed ridden and the hospice could help in taking him to hospital and bringing him back home whenever circumstances demanded.” Mrs. Ikutwa said.

She said that during the initial states of his illness, she thought that could be the end of her husband but she is happy he is alive and strong.

Mrs. Ikutwa thanked Nairobi Hospice for the support they have given his husband and the family at large in terms of drugs, food, and paying rent whenever they are unable to clear such bills.

His fifteen years old daughter Sharon Ikutwa said she was little at the time when the father was ill and did not understand what was going on.

“Sometimes we thought we were going to be without a father but am happy he is here with us and strong like any other person.” Sharon said.

She added that with faith, everything is possible and there is no need of fearing sickness but appropriate action can restore health with proper medical intervention.

Dr Donald Aboge said Nairobi Hospice has been supportive to Ikutwa especially on pain management and other predicaments arising from his sickness.

“He is one man who has lived positively and he is one of the many patients in our home visit diary.” Dr Aboge said.

He said that home visits help them to carry out holistic care to the patient and the family at large as well as knowing the general welfare of the patient in the home setting.

“What amazes me is the family support, even through the toughest times and social deprivation everyone remains very positive.” He said.

Russel expects to proceed with his adventure to the coastal region where he will visit Coast Hospice before making his way out of the country into Tanzania.