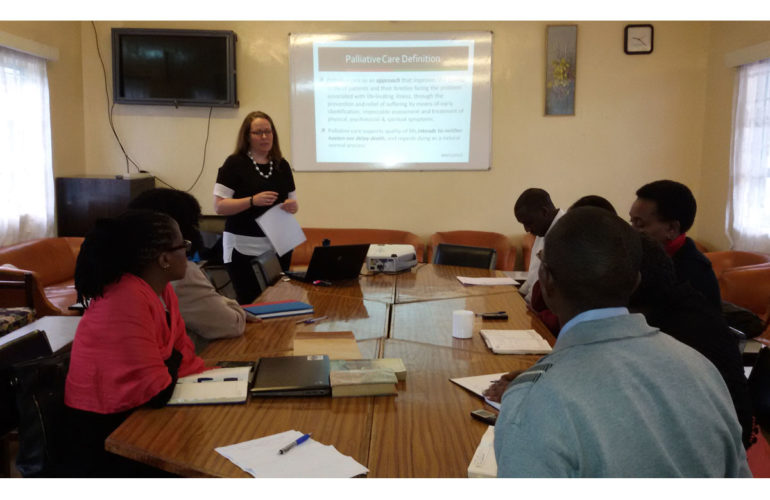 She came to the African continent as a project coordinator for her family’s construction business. By the end of her visit, she was headed to nursing school to pursue a new and fulfilling career path. She had volunteered in various healthcare institutions in her native Canada before travelling to Africa. She chose to make the transition after spending some time at a children’s hospice in South Africa and seeing the palliative care needs in the Rift Valley town of Nakuru where she visited. Kelly would join the British Columbia Institute of Technology to pursue an undergraduate degree in Nursing, graduating with a distinction three years later.

Kelly, who is in now pursuing a Masters degree in Public Health at Simon Fraser University in Canada, is coming to the end of her summer internship at Kenya Hospices and Palliative Care Association (KEHPCA). She says she chose to come to Kenya and KEHPCA for her internship because, “I recognized that KEHPCA’s Executive Director and I shared similar aspirations in integrating palliative care and also because she has a Masters degree in public health and I felt that it would be wonderful for me to learn from her.”

“It also feels that everything is coming full circle for me as Kenya is where I decided to become a nurse originally and I’m back to practice my skills,” she added.

In her time in Kenya, she visited four hospices: Nakuru, Kimbilio in Eldoret, Thigio in Kiambu County; and Nyeri hospice. She also visited the palliative care units at Kenyatta National Hospital and Rift Valley Provincial General Hospital in Nakuru. She has been most impressed by the dedication of palliative care health workers in the country. The determination they show in providing care for the most affected of the population. “While there are vast differences in terms of availability of resources between Kenya and Canada, both systems are working well with what is at their disposal to ensure effective provision and integration of palliative care. The Kenyan system is using available resources well and fighting to get so many more resources to continue the good work in palliative care despite more health care workers being needed to ensure better integration,” she says.

One of the greatest things she has noted in Kenya and Africa in general is the regional and continental collaboration to better integrate palliative care. Countries like Uganda and South Africa who have very impressive models of palliative care are always willing to help other countries that are beginning the palliative care journey. Of her time at KEHPCA, she says, “I have appreciated my time here; I was made to feel valued; the team was open to new ideas and I believe they are going to be a vehicle of progressive change in palliative care in Kenya.”

The registered nurse who works at Providence Healthcare at St. Paul’s Hospital in British Columbia, Canada, says she admires the fact that good basic palliative care is being provided in Kenya and that it is not very complicated. Similarly she is in awe of the fact that good, simple solutions actually work when there is determination.

During her time in Kenya, Kelly has also been to Nakuru to do some practicum work at Nakuru hospice. “I chose Nakuru hospice because I wanted a hospice that was relatively new but also established in doing some work. I knew Nakuru had been opened in the last couple of years. So I chose it and spent time with their staff doing home visits with clinical officers and nurses. It was a more in-depth picture of what the hospice does for the specific community. I also visited the PCU at Kenyatta National Hospital during my time in Nairobi for a more in depth perspective to see how ward rounds are done and see how hospice references are made,” she said. Kelly had also spent some time at the Nakuru palliative care unit.

Her time in Nakuru was also spent at a children’s home called Gabriel learning centre and Nakuru Hope Orphanage. A good friend she met in Nakuru in 2007 started the home. She was staying at the home and helping out with various duties; she helped with children’s basic health needs, took the kids to hospital, provided injections and minor medical procedures. Sometimes she helped out in the kitchen by doing dishes and cooking.

This being her fourth time in Kenya, I was curious to find out why she keeps coming back. Her answers were that: she loves to travel around the beautiful country that is Kenya; Kenyans are a welcoming, happy and people who smile a lot; it fascinates her how people are impressed by her sheng (a local dialect that is mix of Swahili, English and a few local languages) skills; Kenyans make you feel that you are part of their family.

What she had a hard time getting over while in Kenya: African time-keeping; being double-charged for taxi rides; and traffic jams.

She now heads back to Canada to finish her Masters degree studies and get back to work and we at KEHPCA wish her nothing but the best!

Her parting shot; “conversations around death and dying are limited in Kenya, and this shouldn’t be the case, more should be done to increase them so as to increase the cultural comfort around these discussion, so that patients and families are better prepared for the death of their loved one.”