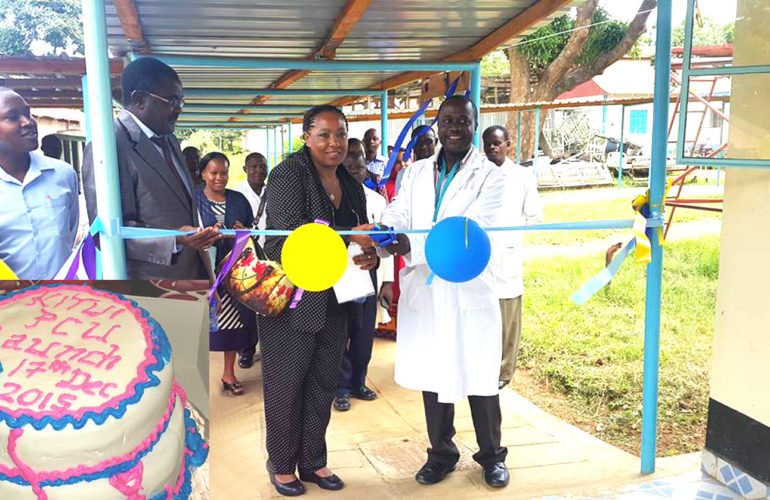 Kitui County Hospital serves a huge geographical area with a big number of populations. The unfortunate thing that has been is that even with the level at which the hospital has reached; there has not been a palliative care unit in the hospital or anywhere else nearby. The many patients from within the county requiring palliative care have had to endure the long distance to access the same at the neighbouring Machakos Level 5 Hospital which has a palliative care unit. “We have been receiving patients from as far as Kitui County at our unit. “ Most of the patients are not able to cater for the expenses of having to travel such a long way on weekly basis,” says Mr. Musau from Machakos Palliative Care Unit.

The long distance is one of the challenges that prompted KEHPCA and the management of Kitui County Hospital to start up the new unit therein. “We are really appreciative of KEHPCA for spearheading this initiative at our hospital. The unit is still growing since its recent inception and we are working with the county government to make sure that it can only grow better and bigger for the people of Kitui County,” observes the Hospital’s Superintendent Dr. Allan Owino.

According to KEHPCA director Dr. Zipporah Ali, the initiative is part of the organisation’s plans to expand palliative care all across the country. “Many of the patients who require palliative care services cannot afford to pay for these services leave alone travelling around looking for them. We therefore need to take the services as closer to them as possible; even to the most interior of places,” says Dr. Ali.

One of the patients (an elderly) who has been benefiting from the unit was present to witness the launching as well and he couldn’t be happier that the unit was started and is continuing to grow. Even though he spoke with his native language, it was clear he was grateful for all that the unit has done for him and his family. “I stay with my wife and it has not been easy. She literally does everything for me including washing me and has stood by me since I was struck by this disease. Initially it was too difficult to travel all the way to Machakos because of my health and the expenses incurred as well but now it is easy because we have our own palliative care unit right here,” says the old man, seated on a wheelchair. The unit has trained his wife on home-care so they don’t always have to come to hospital for his wounds to be cleaned for example; unless it is a major thing. All these have happened because of the new unit at the hospital which is headed by Ruth Ndambuki, a professional palliative care nurse.

The event was a celebration of what stakeholders have been looking forward to launching for quite a long time. All the stakeholders including the hospital staff and a team from KEHPCA were present to witness a celebration that would change the lives of patients and families of Kitui County and even beyond as far as palliative care is concerned. The County’s Cabinet Secretary for health Ruth Koki Mwanzia was the expected Chief Guest but got held up and she sent her apologies and promised to work with the hospital to support palliative care. Dr. Zipporah Ali stood in for her.