Let’s All Raise Our Glasses to Hope for Cancer Kids 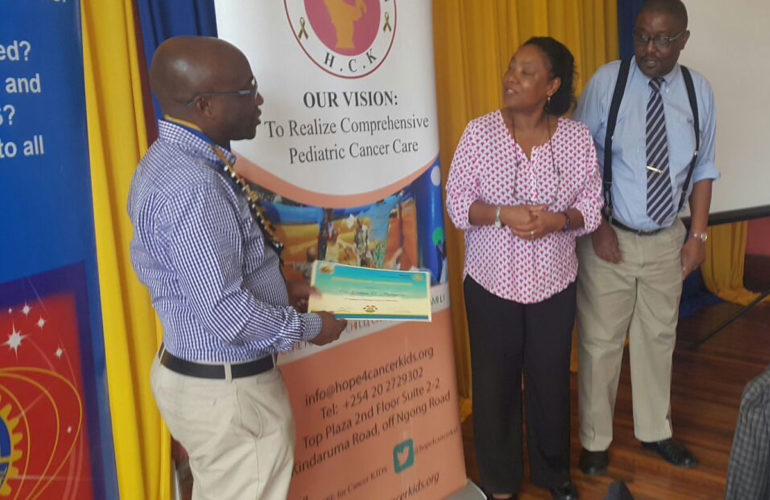 Then the bell goes and the nonchalant environment goes silent and everybody is on hand to listen to the Rotarian president. Then protocol comes along as the Rotarians recite their four way test in unison and then toast to the project yet to be initiated. After a few introductions, Dr. Zippy Ali takes charge, for the course H.C.K.

“Cure for every child is care for every family. Our goal is to create awareness, educate and better the funding for cancer illnesses.” Dr. Zippy Ali.

Hope for Cancer Kids does a lot to help for the treatment of Cancer Kids and a partnership with NHIF that has grown in previous years a fete that the rotary club members were enlightened to. With cases of families being turned away because they do not have the funds to treat their siblings having been on the rise, with this partnership a patient can be taken care of for a whole year. A patient (and their family) need Kenya Shilling 6000 ($60) for that one year’s medical cover.

During the December holidays hope for cancer also go to the children wards and take goodies to the children who are always open to anything. Some pick books because they would just like to have education just like the other children of their age. Some others even just need a sense of parental love, just to fell cared for.

‘Every child is my child.’ South African proverb

“One of the children just whispered to me due to his deteriorating condition and told me he wants to go to Busia to see his mother, someone he loved but hadn’t seen her for the longest time ever. This was touching and then I realized I want to help these children not only financially but also from a parent point of it.” says Dr. Zippy Ali. She insisted that these children need to be helped at early stages of their diagnosis and that will help them grow normal lives and live life in a procedural manner unlike those who did not get early diagnosis and ended up being admitted and hence confined childhood.

A video was played for those in attendance and how the children really appreciate those who get time to go be with them. After a few interviews in the short footage the Rotary members are left in awe and just keep silent.

“Both Chemotherapy and nutrition work hand in hand in the betterment of a patient’s health and one needs not ignore either.” Dr. Zippy, a response she gives after a question is posed by a Rotarian in reference to the latest news that one can survive from life threatening illnesses with just nutrition.

“I got diagnosed with bone cancer while I was in the University of Nairobi, back in 2008, after I had injured my leg while playing soccer. After frequent doctor visits and assumptions I decided to do chemotherapy and found out about my condition. I was lucky I was insured by the university and I was able to afford the 9 months in hospital. I got friends at the time I was in hospital and a few were really suffering. I ended up losing my leg but I am glad I still have a life, a mouth I can use as a tool for information. Many of them were even being turned away because they did not have the funds for the treatment, something that really disturbed me.” narrates Nephut. Many people in the room had their eyes glued at Nephut who had a different perspective of it all, a perspective that this ‘thing’ can be treated with the right treatment and the right facilities.

A final toast is done to the new partnership, H.C.K and the Milimani Rotary club. A sight for good Palliative care deeds to come. ‘Light at the end of the tunnel’.