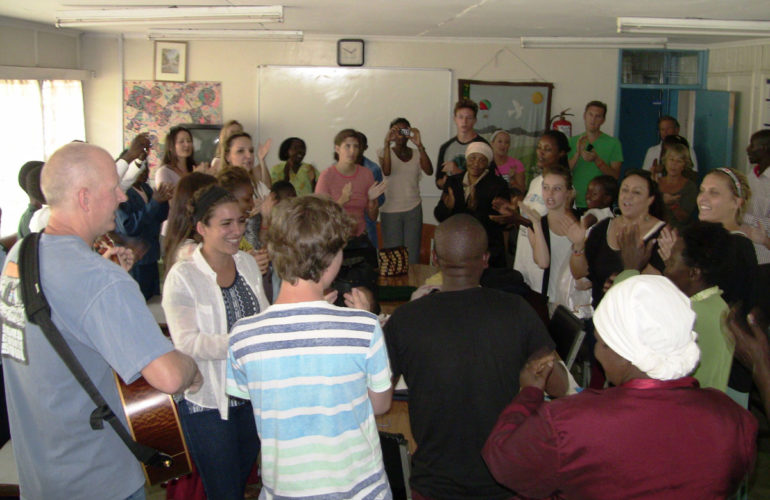 Nairobi Hospice was host to 21 visitors from Mariners Church, California in the United States during their recent patient daycare held every Thursday.

M/s. Kitui said that they (patients) love being together and those who have lived with cancer for some time encourage others.

“It is all about bringing positive thinking in their mindset especially from the stigma associated with cancer, and we have seen a lot of change in the lives of our patients.” She said.

Pastor Christian Mungai, the Global Engagement Pastor at Mariners said that humans are ordinary people but as they get to passionately fall in love with Jesus, they are able to courageously and fearlessly change the world.

“We’ve been encouraging members to step out and do something drastic, something encouraging within their community/society.” Pastor Mungai said.

Pastor Mungai said that they have visited Nairobi Hospice four times, a hospice they came to know about through partnerships with Mavuno Church and Twakutukuza Trust.

He said that trough these partnerships, they have come to know of people doing great things in Africa and Kenya and he believes that time has come when Kenyans are stepping up to be the change agents.

“We have always been encouraged to come and see these patients because they are going through really difficult times and we have always tried to keep them away from their pain.” Pastor Mungai said.

He said that sometimes embracing and engaging pain is probably the best thing you could ever do to someone’s life.

“I usually tell our teams that as they come here, they are coming to be in touch with some of their own pain because when we are helping these people, we get to learn that there are other pains people go through that are not physical.” Pastor Mungai said.

He said that as they try to keep them away from pain, they discover other pains including emotional, social and identity crisis which sometimes one doesn’t realize until s/he comes face to face with someone suffering from the same.

“Nairobi Hospice has become a place for us to experience people who are going through some of these pains and the positive response coming from the care given here is tremendous such that we have come to accept their (patients) pain because it is so evident.” He said.

The Global Engagement Pastor said that it is amazing to see the work that Lynette and her team are doing.

He said that the daycare team’s work is incredible as most patients identify them as their doctors because they care for them at a personal level, knowing where they are coming from and what they are going through.

“Sometimes the best present to give someone is the gift of presence.” Pastor Mungai said.

His encouragement to Kenyans is to overcome their fear and stand with these men and women who are doing incredible work.

“Your lives will be changed as you give hope to the patients because even if it is just for two hours, they forget their problems and feel that they are dignified and worth living. We always think that all we need is food, shelter and clothing. To a greater extent this is true, but the deeper thing that we need is identity and belonging in the community we live in, and this is what these patients need.” He said.

In addition, he said that Americans and other outsiders can come to assist but they do so for a week or two. “There are Kenyans who can come every Thursday to encourage and support the work that is done here.”

Thanking the visitors, one of the patients said that the hospice has supported them in many ways and having visitors at their daycare, makes them know that someone somewhere cares.

“Some of us did not go to school and the little English that we are speak has been learnt it at this daycare, besides other skills such as knitting sweaters.” The patient said.

The patient added that when one is told s/he has cancer, her/his pressure might go up but through the sharing at the daycare, such a patient gets to accept the reality and becomes stronger.

They were thankful for the presents brought by the visitors and thanked Twakutukuza Trust for always remembering them whenever they have visitors from their partnerships within and outside the country.