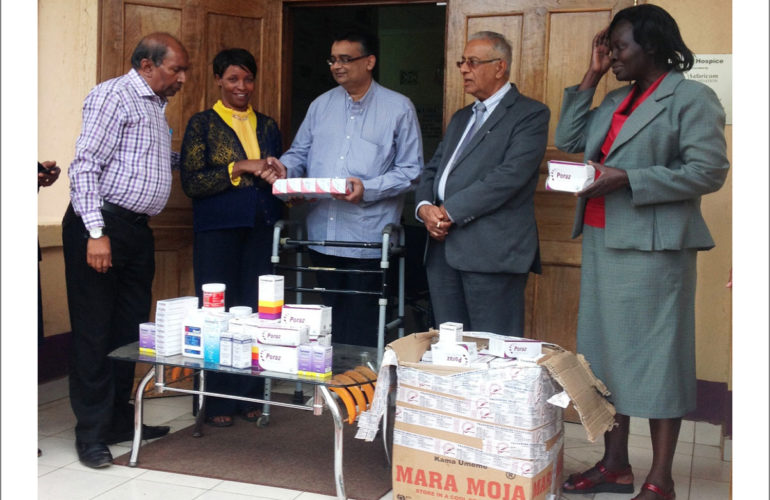 Kenya Pharmaceutical Society Nakuru Branch and its allies have donated drugs estimated to cost KES. 50,000 and a cheque worth KES. 10,000 to Nakuru Hospice.

During the donation, the donors congratulated the Hospice for the good work they are doing and promised to support the services where they can for the benefit of the patients.

Kenya Pharmaceutical Society Nakuru Branch Chairman Dr Joseph Muhunyu said that the members have decided to make this an annual event during the month of August.

“I’d like to thank the donors for this generous contribution and we assure them that their donation will reach the intended clients and will have a great impact in improving their health,” said Nakuru Hospice Chief Executive Officer Elizabeth Ndung’u.

She recalled the past support and commitments the donors have made to support the Hospice mentioning The Lion Club who have previously supported them with drugs, furniture and equipment.

Elizabeth said that with this spirit of supporting the hospice, more partners will emerge with similar initiatives to support our patients.

“I am appreciative of the existing partnership and promised to work harder in provision of better services to our clients,” said Elizabeth.

The Hospice CEO said that these medicines will go a long way in managing infections, anemia, constipation, lack of appetite & vomiting, difficulty in breathing and ulcers among many other symptoms.

She said the duration these drugs will last depends on the frequency of use and the type of drug such that some will be out of stock within a period of 2-3months while others can last up to six months.

“If large amounts of drugs have an expiry date of within three months and we feel they are not moving fast we donate then to other clinics so that they do not go to waste,” she added.

The drug donation followed another one made in early August by Nakuru Lions Club with the club’s President Shailesh Sheth saying that they will continue supporting the hospice because they have been impressed by their work of improving the life of patients who cannot afford drugs due to their poor economic status.

The Hospice currently serves an average of 60 patients per month and mostly depends on well wishers for its smooth running since majority of the patients are unable to regularly afford medicines.