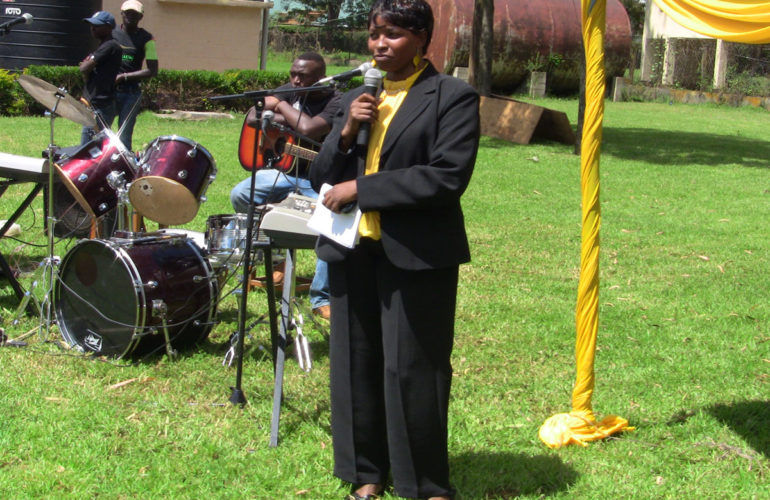 It is encouraging to read of women across the globe, who are founders of hospices, but it catches the eye to learn of a woman who founded a hospice with no background in the health profession.

In November 2005, Mrs. Elizabeth Ndung’u, CEO Nakuru Hospice, heard for the first time, the word palliative care. She is an accountant by profession as well as an entrepreneurship specialist holding a Masters Degree.

Her father was terminally ill; he had suffered for three years through prostate cancer and was bed-ridden at home. “I had gone through a lot of financial, emotional and psycho-social problems in the family. My father was agonising in pain for three years and we could not help.” She says.

It was this state that a friend noted and identified Nairobi Hospice as a place where her father could get palliative care services.

“I got in touch with Dr Zipporah Ali who was by then the Nairobi Hospice Doctor. She explained to me what palliative care entails and I developed interest in the field.” She says

Elizabeth felt that her father and the family at large would benefit a lot from the services of Nairobi Hospice and she was convinced to take her father to the hospice.

However, Mrs. Ndung’u says, she could not achieve this new window of hope. “My family lived in Londiani in Kericho District, 250 km away from Nairobi.

“My father was very sick and could not travel by public means and I did not have a car. My friend insisted that all major towns have hospices where we can get services and therefore, I embarked in finding one in Nakuru where I used to work. To my disappointment I did not find any. I had to rely on services from Nairobi Hospice.” She narrates.

Her father passed on in February 2006.

Having known what palliative care is and how it improves the quality of life of those with life limiting illnesses and their families changed her life completely.

“I maintained my partnership with Nairobi Hospice, who later offered palliative care for 40 health care professionals in Nakuru. I attended the training and it was an eye opener.” She says.

Mrs. Ndung’u says she understood the palliative care concept, its application and impact to patients and families. It developed in her an idea of coming up with a hospice in Nakuru that would serve many people in the region who are suffering in pain. “I became a palliative care advocate in Nakuru.”

Despite Dr Zipporah leaving Nairobi Hospice to be the coordinator at Kenya Hospices and Palliative Care Association, Mrs Ndung’u says she still kept in touch and told her the intention of establishing a hospice.

“She encouraged me and facilitated a workshop I had organized for various stakeholders in August 2007. It was at this workshop that I sold my idea.The idea was bought and owned by all stakeholders and a steering committee was established to kick start its implementation.” She says.

Nakuru Hospice was established in collaboration with the Government of Kenya through the Ministry of Medical services, who provided a building located at the Rift Valley Provincial General Hospital in Nakuru .

Mrs. Ndung’u says the building was renovated in 2009 and the staff moved into the new premises in 2010 before it was officially opened in December 2012.

Today, Nakuru Hospice is registered as a Trust and has a Board of Directors with five staff and Mrs. Ndung’u says they have provided palliative care to more than 900 patients and their families, to date.

KEHPCA has continued to provide technical support to Nakuru Hospice.

Mrs. Ndung’u says her effort to advocate for palliative care in this region has challenged many people including patients. “Many do not understand that I am not a health care professional yet I manage a health care project.”

She says that many have come in to support the hospice in a big way, especially the health care professional fraternity.

“With the support of KEHPCA, universities and health colleges in this region have taken the hospice as a place where they can have practical involvement in palliative care by sending students and volunteers to work at the Hospice.” Mrs. Ndung’u adds.

She says that community has recognised the usefulness of the services offered by the hospice and has always invited them for joint community awareness activities such as Breast Cancer Month and World Cancer Day among others.

Other Institutions such as banks, private companies and individuals have occasionally donated as an extension of their Corporate Social Responsibility towards supporting activities at the hospice such as day care and the bereavement support program.

According to Mrs. Ndung’u palliative care continues to be recognized In Kenya especially with the growth in number of hospices and Palliative Care Units (PCUs) in the country.

She adds that the advocacy and lobbying efforts by KEHPCA to the Government of Kenya, higher institutions of learning and to the public, Kenya is placed in a better position with regard to palliative care provision compared to most African countries.

However, she says that there is still more to be done, especially in the health sector to recognize pain management and palliative care as part of health care in Africa.

“Being a non health professional, I had considered my profession as a limitation to implement palliative care. I have thought of undertaking a palliative care course like a diploma but my educational background limits me.” She agonizes.

“My dream is to build Nakuru Hospice to be an institution that helps expand palliative care units in all hospitals within the region and beyond so as to reach the wider community.” She says

Mrs. Ndung’u would like to appeal and encourage all health professionals to consider exploring the palliative care profession as a special discipline that improves the quality of life of those with life threatening illnesses.

“Let them understand that health care is not treating the illness alone but it is more attached to humane, care and love. Health care goes beyond the patient and it includes the family. It requires identifying oneself with the patient as a friend and not as just a client.” She concludes.