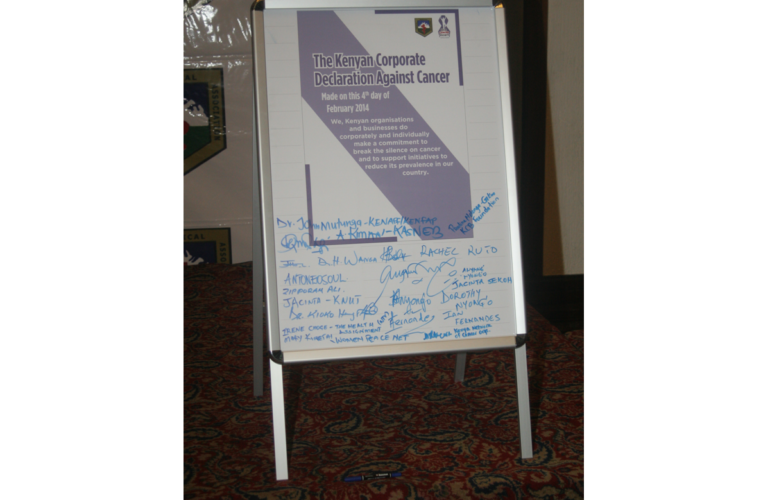 The initiative, spearheaded by the Kenya Medical Association (KMA), aims to accelerate awareness on cancer screening for early detection and advocate for increased resources and policy changes to address the social and economic challenges posed by cancer.

Speaking at the event, the Deputy President’s wife Mrs. Rachel Ruto commended KMA for the initiative saying that a lot more needs to be done.

Mrs. Ruto said that it was unfortunate that many Kenyans could not afford regular check-ups and only find that they have cancer when it is too late.

“I would like to urge the health sector, both public and private, to avail basic screening to Kenyans especially those in rural areas and in informal settlements so that we can save lives.” She said.

Mrs. Ruto, who pledged Ksh. 100,000 towards the awareness initiative, called on Kenyans to embrace healthy lifestyles to minimise the risk associated with cancer, adding that such simple measures would make a big difference.

KMA Vice Chairperson, Dr Elizabeth Wala said that over 40% of cancers were preventable through tobacco and alcohol control and promotion of healthy lifestyles including physical activity.

She called for enhanced training of oncologists noting that Kenya ha about 12 cancer specialists against a global recommendation of 300 oncologists per population of 100,000.

Kisumu County Senator, Professor Anyang’ Nyong’o said more efforts should be made to have universal health coverage to contain the disease.

“The problem is that many Kenyans do not afford treatment for the disease and this is why many of them are getting out of the country to get treatment. It is because of this reason that universal health care is important for this country if we are to contain the disease,” said Prof. Nyong’o.

Communication Commission of Kenya (CCK) Chairman Mr. Ben Gituku asked both private and public organisations in the fight against cancer to use their employees to reach out the community with awareness messages.

Mr. Gituku said that cancer specialist could also consider using social media to spread the message about cancer to the public.

KMA will in February 21st hold a scientific symposium for medical personnel and health workers to explore, among other issues, how information communication technologies can be deployed to scale up caner surveillance and management.