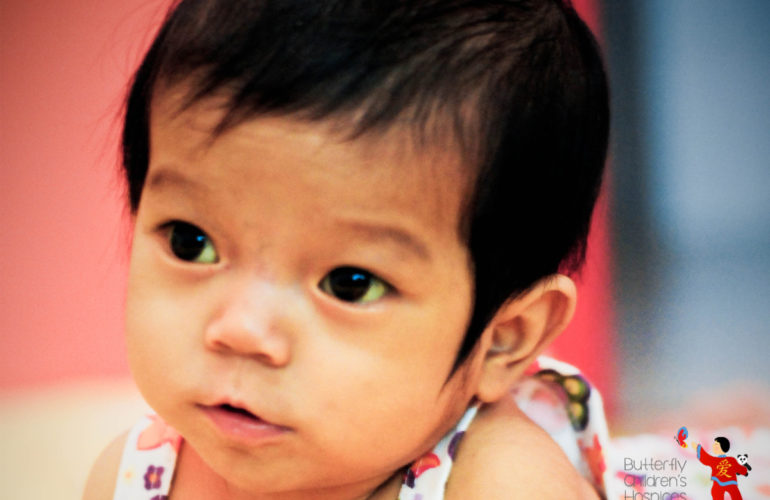 The remarkable team at the Butterfly Children’s Hospices in Changsha and Nanjing provides palliative care for children and babies who have been abandoned.

Isabel’s story
Isabel (pictured above) was born with serious liver disease, and was sent to Butterfly Home for palliative care at four months of age. At first she was tense and afraid to be touched but during the two years she lived at BH she relaxed and learnt to trust – she was able to live a happy, active life. Her time on earth was short but every day was truly cherished.

Lyn Gould, Co-founder of BCH says “I have been privileged to witness the most amazing love – from women in this country who have been raised in a man’s world, coming into their own, giving loving cuddles, smiles and play to the most ‘difficult’ children because they have learned to see the child, not the illness. We have tried to build a culture in the Butterfly Homes which cares for the individual – with people who have been raised in the communist system.”

Butterfly Children’s Hospices (BCH) established the first children’s hospice and community palliative care service in China. They are working in co-operation with the Chinese government to establish a model of children’s hospice and palliative care that is sustainable, promoting the concept that every life is valuable and a gift. Butterfly Homes are located in government run orphanages and provide care for abandoned babies and children that the doctors estimate have less than six months to live.

The abandoned, dying children which BCH look after have many different forms of illness and/or disability ranging from simple prematurity to complex genetic disorders that lead to an early death. In between, the majority are those conditions caused by ignorance and poor healthcare, such as syndromes caused by perinatal maternal viral infections, which lead to chronic and often severe disability. Providing palliative care for children can be complex in a superstitious culture where having a sick or disabled child is viewed as a curse on the family and a punishment for wrongdoing or ancestor neglect, often leading to abandonment. Families will often abandon their child in desperation, not knowing what else to do and hoping they might get the care they need in an orphanage.

You can learn more about Butterfly Children’s Hospices and the wonderful work that they do on their website.

World Hospice and Palliative Care Day is a unified day of action to celebrate and support hospice and palliative care around the world. The theme for World Hospice and Palliative Care Day which will take place on October 10, 2015 is “Hidden Lives / Hidden Patients”. This year’s theme will focus on the patients living in unique conditions that often struggle with access to palliative care including children, LGBT individuals, HIV prisoners, soldiers and those living in rural settings.