Care Palliative care from hospital to home to community - ehospice

Palliative care from hospital to home to community 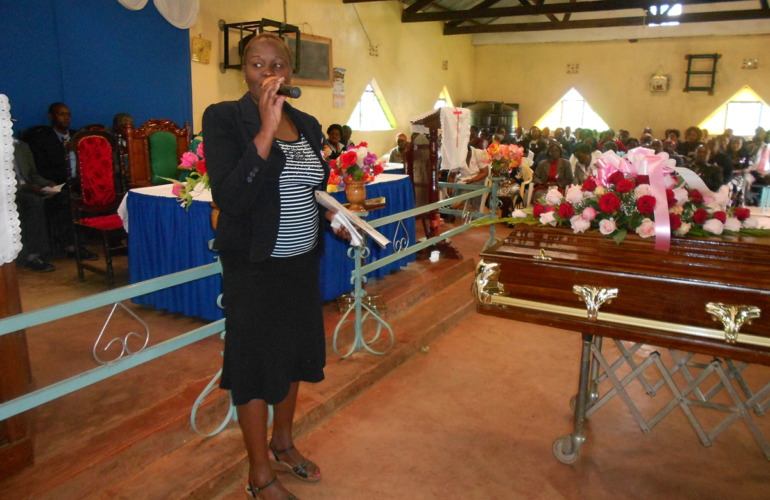 Mary (not her real name) visited Meru Level 5 Hospital Palliative Care Unit (PCU) in February 2013 in the company of her daughter suffering from Squamous Cell Carcinoma, a type of skin cancer.

She looked enthusiastic though she seemed to be in pain with a swelling on her left cheek slightly distorting her face.

Her disease was diagnosed in the year 2012 but due to her old age, chemotherapy would not be administered leading to deterioration of her condition. She was then referred to our PCU.

We assessed and categorised her pain as physical, psychological, social and spiritual. Her daughter was also psychologically tortured as she had great attachment to the sick mother. She looked more ill.

With available pain management drugs, Mary’s physical pain was controlled as well as her psychological pain taken care of through counseling.

Gradually, her condition improved and despite the disease progression that resulted to pus oozing from a stoma that developed later, we managed to treat the infection and maintain hygiene to prevent bad odor. She could now be taken care of at home.

Her daughter constantly visited the PCU and said how she was stressed. She even indicated that if her mother died, she could also die.

We shifted our attention to the stressed daughter who could even not allow other siblings to take care of the mother. She thought they could not manage her well.

With time, Mary’s condition deteriorated and she was bedridden. Even basic activities like bathing required assistance.

When information reached us about her condition through the daughter, we paid her a home visit with the help of Most At Risk Populations (MARPs) program who have an office neighboring ours.

They offered us a vehicle for our transport to see Mary. She was happy to see us and her heart was at ease.

Since we depended on another program’s vehicle, we made a second visit four months later and found her condition worsening, a situation that made both Mary and her daughter worried.

She could hardly sit upright. She was passing urine and stool in bed and this made her feel so bad.

Despite our advice to use pampers, she declined citing cultural beliefs. She told us to pray and chase death away for she was not ready to die.

Mary’s reason for not being ready to die was her daughter who had not accepted the situation at hand.

We struggled to make her daughter understand the realty of death.

Her daughter finally accepted and a long discussion followed with her mother, who was later admitted in hospital.

She lived for one more month after the daughter releasing her and at her death, the whole family met to celebrate Mary’s life and took her body home for burial.

Once more, we managed to attend the burial using our friends’ (MARPs) vehicle.

The family decided not to use the usual red ribbons during burial but rather substitute them with pink ribbons for cancer awareness.

The family asked me to address the people who were in attendance and talk about cancer and palliative care.

The burial gave an opportunity for family, friends and the community to have cancer awareness and understand what palliative care can do to alleviate  suffering among those suffering from a life threatening illness.

From this story, we can attest that palliative care;