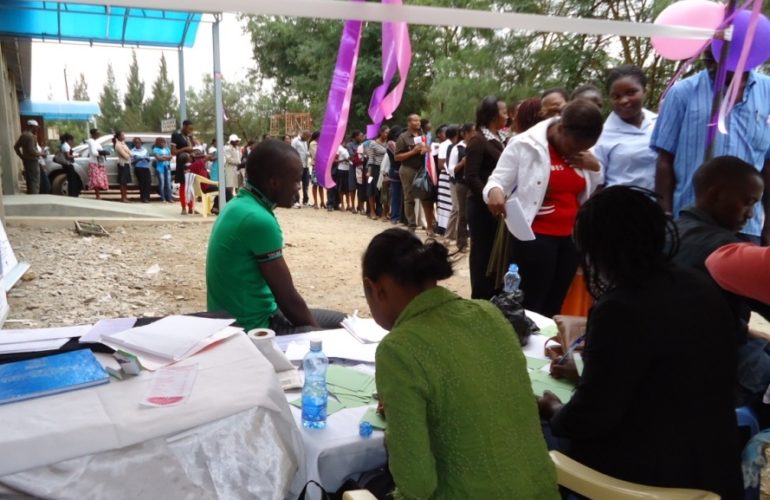 As the world was gearing towards the World Cancer Day, community members in Zimmerman were receiving free screening for BMI, Blood Pressure, Diabetes and various cancers at Madre Teresa Catholic Church.

The event was organized my Cancer Awareness Center of Kenya (CACK) in collaboration with its partners.

CACK director Boniface Mbuki said the turnout at the event was overwhelming forcing them to turn away most members of the public .

“We were able to serve 800 members of the public but the number that turned up for the free screening overstretched our capacity.” Mbuki said.

This, he said, is an indication that cancer awareness creation is slowly gaining ground and more people are willing to come out and know if they are cancer free.

Mbuki said they only had two doctors and six nurses whose services were overwhelmed by the huge numbers that turned out.

Scan for Life, an organization that provides a range of modern and efficient diagnostic and imaging services were present at the event and helped in cervical cancer screening.

Other than the women who got screening for cervical and breast cancers, their male counterparts were screened for breast cancer and prostate cancer.

Mbuki said the resources they had were limited and despite referring some members of the public to other health care centers for screening, most of them opted to return home.

“We are trying to work with stakeholders to offer more free screening as most people tend to think that the cost of screening is way beyond their means.” Mbuki said.

The CACK director urged more organization to come out and offer free screening to members of the public since the awareness campaigns seem to have yielded positive results.

Due to the increasing awareness resulting to increased cases of cancer, Mbuki said CACK is looking forward to open a Cancer Counseling and Awareness Center in the near future as they advocate early detection as the best protection.

The event incorporated a session in nutrition, which was facilitated by Health Basics and Nutritional Services that saw the public educated on basic dieting practices they should embrace and those they should shun.

Signs and symptoms of various cancers were also tackled as well as dispelling the myths surrounding cancer as per the theme of this year’s World Cancer Day; ‘Dispelling the damaging myths and misconceptions about cancer’.

Zimmerman is a county assembly ward in Nairobi with an approximate area of 22.4 km2 and an approximated population of 40,000 people.

Other organizations who took part in the event include Medlink Labs and Surgicals, Sanitas Lotus Medical Center and Giovannis Sylvia Hospital.

This event followed last year’s events where the organization held a breast cancer awareness campaign at Queen of Apostles Catholic Church, a 10km Cancer and Health Awareness walk and a free medical camp, all in the month of October.