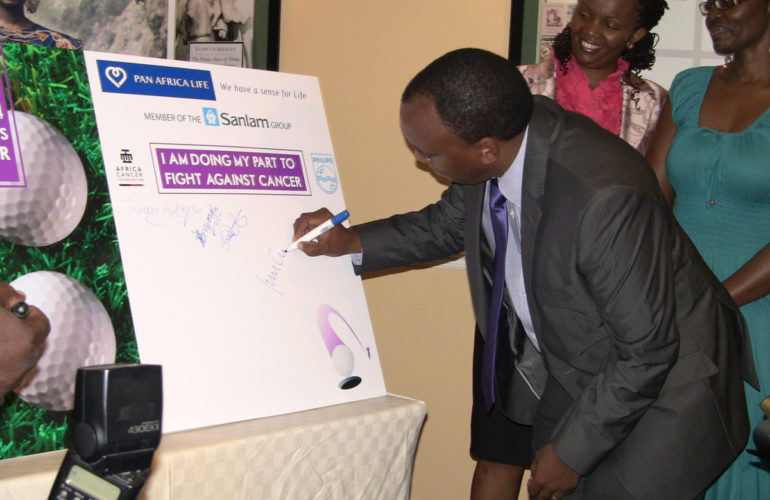 The challenge will involve a golf tournament series across six counties where the screening is scheduled to take place with hospice partnership in the targeted areas.

Speaking during the launch, ACF Managing Director Mrs. Dorothy Nyong’o said that such collaboration is crucial as providing cancer prevention measures which cannot be achieved by an individual.

Mrs. Nyong’o said that the commitment to start AFC was initiated following his husband’s diagnosis that caught them unawares proving the immeasurable levels of ignorance that exists about cancer, not only among the poor but also to the elite in society working in the health sector.

“When we started this foundation, our aim was to create a level of awareness where Kenyans can take on the doctor by going to the internet and researching more about their illness if symptoms persist,” said Mrs. Nyong’o.

She indicated that most Kenyans fear or have a lot of trust for doctors to the extent that they do not question prescription despite not having positive impact on their illness until a time when the illness gets to more serious levels.

“Knowing more about an illness will empower one to take action about it,” she said adding that ignorance is a common thing that has led to most people being diagnosed late.

“One evident thing is that the public are hungry for cancer screening but they cannot afford the services. That is why when there is information about a screening event through the media, they come in thousands,” said the AFC managing director with a message to Pan Africa Life to be ready for the numbers.

She said that the initiative will give this group of people a chance to be screened free of charge and those who test positive and require a biopsy, the initiative seeks to sponsor them for the same as well as support their treatment as per the funding that the foundation shall raise through corporates and individuals.

“We hope to get more people to team up with us and give generously towards this initiative so that we can support more Kenyans,” said Mrs. Nyong’o.

Kenya Hospices and Palliative Care Association (KEHPCA) Executive Director Dr Zipporah Ali was pleased with the initiative saying that it will help in early diagnosis and possible treatment of cancer cases.

“I am delighted to note that hospices in the identified areas will be involved in this initiative to help support those that may need palliative care following diagnosis,” said Dr Ali.

Pan Africa Chief Executive Officer Mr. Tom Gitogo said their Corporate Social Responsibility this year focused on health, a reason why they have partnered with ACF to take leadership in the fight against cancer following its increased incidences in the country.

Mr. Gitogo said that they will drive the initiative through countrywide awareness campaigns with information and screening of breast, prostate and cervical cancers.

He said that the awareness will be accompanied by a six part golf challenge series commencing on 25th and 26th April in Nyeri County and ending in Nairobi on 20th September 2014 where golfers will participate in a tournament aimed at raising more funds towards the initiative.

“We wish to take this campaign to all counties in the country. We are therefore appealing to other corporates to come forth and join this worthy course and help us take cancer screening to other counties so that we reach all Kenyans for cancer has become life snatcher. It is my belief that cancer is curable if it is detected early,” said Mr. Gitogo.

The Kenya Golf Union Chairman Mr. Francis Okwara was excited to be part of the initiative saying that what Pan Africa Life has done is really encouraging for the Kenyan society as a whole.

He urged all golfers to come out in large numbers and take part in the tournament series at the same time get education on cancer.

Marketing Director at Philips, one of the sponsor companies, M/s. Sharon Karuga said that Non-Communicable Diseases were on an increase and it was time to tackle them through increased research, education and training of healthcare workers.

She indicated that the limited number of diagnostic equipment has contributed to late diagnosis of cancer which could otherwise be prevented with early diagnosis adding that Philips will continue its commitment to deliver new healthcare technologies.

“The key part is training health care workers on early detection of cancer adding that Philips was keen to tackle cancer following its increase,” said the Managing Director.

Other supporters in the course are MTN Insurance Agencies, AON Kenya Insurance Brokers, Chase Bank, Brainwave Communication Ltd and AstraZeneca among others and a call for more companies to join the course was made.