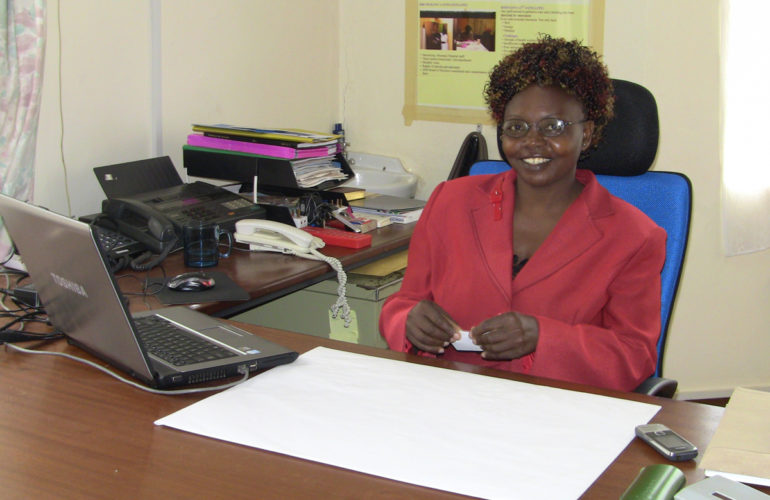 Miraculous is the word Nyeri Hospice Chief Executive Officer Saraphina Gichohi can use to describe the success she has witnessed with a stoma group started at the hospice a while back.

This is after the hospice opened its doors to patients with colorectal cancer and most of whom had undergone colostomy to create a stoma. This meant that they had to use colostomy bags on a daily basis.

A bag (colostomy bag) is then placed at the opening to collect the body waste. Ordinarily, this bag needs to be changed several times during the day depending on the frequency of body waste release

“With time, the patient’s numbers were increasing. Most were using nylon bags and those who could find stoma bags; they were of poor quality and could not offer the best service to the patients. I had a friend in the UK who works as a stoma nurse and I asked if she could manage to get us a few stoma bags when she visited. She agreed,” says Saraphina.

During her visit to Kenya, Saraphina says that she brought six cartons of stoma bags which helped the patients a lot but her support did not last long.

“Initially most patients were too uncomfortable and sometimes the nylon bags leaked and smelled hence they could not us public means of transport. We had to do something about it,” says Saraphina.

She spoke to the Kenya Cancer Association Vice Chairperson David Makumi who asked her to write a letter to Aga Khan Hospital. “That was the starting point. They swiftly responded as they had a cancer clinic that was supporting cases similar ours at hospice.” She says.

Her joy came when Aga Khan put them under their program as beneficiaries of stoma bags.

The week before ehospice met her, she had collected a number of colostomy bags from the hospital’s godown for her patients.

“About 36 patients in the stoma group therapy currently using the bags are happy and comfortable. This is all from God and I feel good when I see them come, sit and share with happy faces,” says the Hospice CEO.

She says that the stoma group therapy is held every second Wednesday of the month in an effort to encourage new patients who are yet to cope with the fact that they have to live with a colostomy bag for the rest of their life. The patients share experiences among themselves and are also educated on stoma care.

“There is one man who could not have the courage look at it (the stoma). He came very devastated and it is his wife who used to change him. When he came and saw other men talking about it freely, sharing how the bag is changed and the diet to take, he finally came to terms with his condition. To most of them, it is a traumatic experience,” says Saraphina.

She says that it is worse for those patients who have had to undergo the corrective surgery and start using the bags not as a result of cancer.

“There is this 16 year old young man who fell from a motorbike and got injured. He had no hope of passing stool normally and a stoma had to be created. He now has to live with it positively and the burden of making his relatives understand the situation lies on the support this group has offered. I pray that such support keeps trickling for these patients,” she says.

The CEO thanks Aga Khan Hospital who took up the initiative of providing the stoma bags to these patients, even finding time to come to the hospice and launch the group and see the patients who needed this support.

“We are also grateful for the support we received from the Australian government through Aga Khan  Hospital  who trained one of our nurses, Mercy Njau, to become a specialist in enterostomy therapy.

She says that having Mercy as a stoma therapist has really helped this group at the hospice.