The Birth of Eldoret Hospice 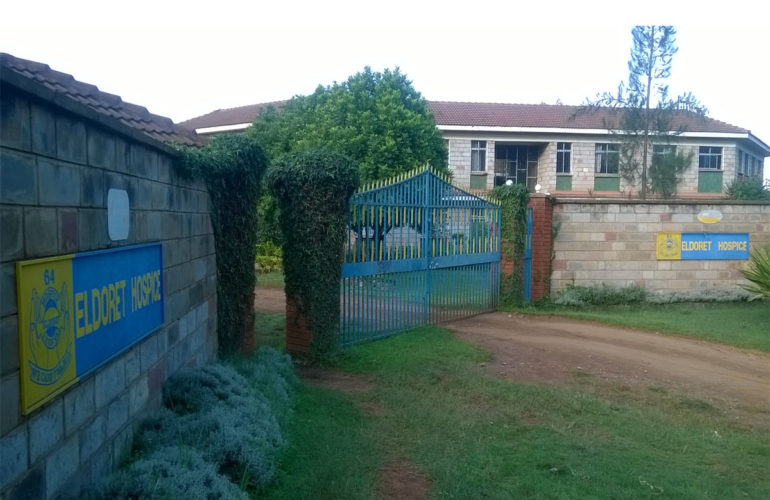 She came across a woman writhing in pain with a diagnosis of cervical cancer having been discharged to go home with no indication of further support from the health care team.

Sister Rose had heard of Nairobi Hospice and took a step of visiting them and inquiring if there was anything that can be done to help such a patient.

As a result of her inquiry and further consultations, she decided to undertake a five day palliative care training at Nairobi Hospice to have a feel of what palliative care entails.

Armed with palliative care skills, Sister Rose started a small clinic for palliative care within the hospital after securing a room from the administration, which most knew as room 34. This was in the year 1994.

After some time, she approached the Catholic Diocese of Eldoret and spoke to Bishop Korir to seek support towards establishment of a hospice within Eldoret.

During one of her visits, Bishop Korir introduced Sister Rose to visiting Father Paul Durr who listened to her dilemma and promised to do something about it.

When Father Paul went back home, he embarked on raising funds through his friends and with the money, the Catholic Diocese managed to purchase a piece of land.

With continued fund raising by Father Paul, more funds were secured to set up a building that now houses Eldoret Hospice which was handed to the community in 2001.

It is this facility that began with one patient that has been home to over 3000 patients with cancer, HIV, renal failure, kidney failure and other life threatening illnesses since its inception according to Mrs. Miriam Mungai, the hospice care team leader.

Mrs. Mungai says that most patients with HIV/AIDS prefer going to the Academic Model Providing Access to Healthcare (AMPATH) clinic where they get relevant medication and nutritional support.

She says that hospice patients are referred to the team by anybody, be it a hospital or a beneficiary of their services.

“Once we receive a patient, we are able to offer different types of support including outpatient, home based care and day care among other psychosocial support services,” says Mrs. Mungai.

For the terminally ill patients, the care team leader says that they encourage them to receive care from home and proceed to train their carers on the basics of ensuring the patients are at all times comfortable.

The day care concept enables patients to come together and encourage one another, getting them out of the usual environment they are used to that may be boring and contacting long time survivors (cancer conquerors) to come and offer them encouragement.

For their outreach program, Mrs. Mungai says that they spread the word to the community and encourage them to go for screening to enable the health care team detect life threatening illnesses early for higher chances of cure.

Mrs. Mungai says that Eldoret Hospice initially covered the whole of North Rift region but currently they have set up a satellite center at Webuye adding that Nakuru Hospice has since reduced the burden.

“Once patients come here, they get a competent team that lets them know and understand their illnesses hence they stop moving around trying to look for cure for their terminal illnesses,” says Mrs. Mungai.

She says that due to the illness they are suffering from, some patients have since stopped working and are poor financially. “We do not chase anyone away but accept whatever amount they have for our drugs, as expensive as they may be.”

The care team leader says that they rely on charity and fundraising activities to cushion their yearly budget and to support them in the day to day care of the hospice patients.

The hospice currently has a dedicated team of five health care workers and five support staff to make life as comfortable as possible for patients with life threatening illnesses from Eldoret and its environs.