Brian and Gisela say ‘I Do’ at Stepping Stone Hospice 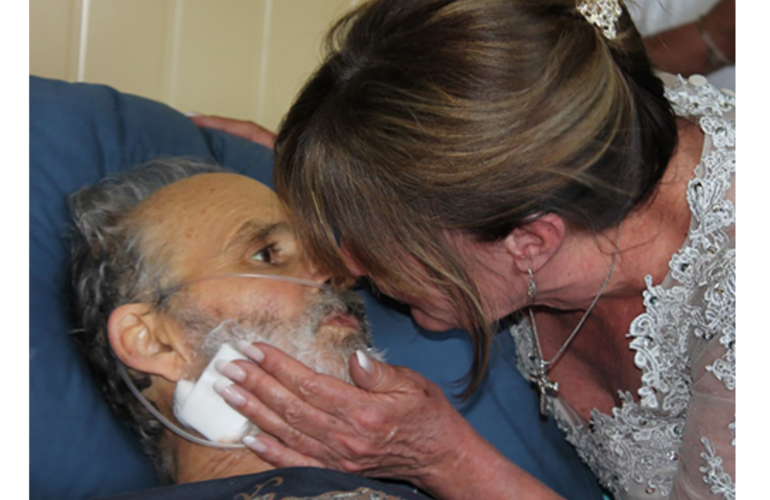 The 67-year-old Brian was diagnosed with cancer only six weeks ago and passed away on Sunday evening, 5 November – but not before fulfilling his promise to Gisela.

The couple met at a biker function over 16 years ago. “He kept asking everyone for my number,” recalls Gisela. “He eventually asked me out and for our first date took me with him on a Toy Run charity ride.”

Both divorcees, Gisela was initially reluctant to remarry. “I felt like I’d been there, done that. But Brian was persistent, so in February this year we decided to set a date,” she explains. The big day was planned for 5 January 2018 and Gisela already had her dress.

Gisela contacted Stepping Stone when it became clear that treatment and other interventions were no longer an option. “The ambulance we arranged to transport Brian broke down on the way to collect us, so we only managed to arrive at Stepping Stone after 8:30pm on Wednesday.” Despite the late hour, Gisela says that Clinical Services Manager Sister Sheryl Newman and CEO Tersia Burger were waiting to receive them with open arms.

A director of the Jasmine Lotus Foundation, an organization that uses the power of philanthropy to help improve and change lives, Gisela was already well aware of Stepping Stone Hospice and was one of the people who attended the ‘Coffee with Debbie’ event last year, that saw 49-year-old hospice patient Debbie Townsend’s final of wish of enjoying the company of some ‘good ole bikers’ fulfilled when 500 bikers arrived at Stepping Stone’s In-Patient Unit from all over Gauteng.

“The Stepping Stone staff have been absolutely amazing. I cannot believe how quickly they got everything together for us to make our wedding possible and cannot say thank you enough,” said Gisela on Thursday afternoon before the ceremony.

On behalf of the team at Stepping Stone Hospice, we would like to thank the late Brian, Gisela, their family and friends, for allowing us to be a part of such a touching moment in their lives.