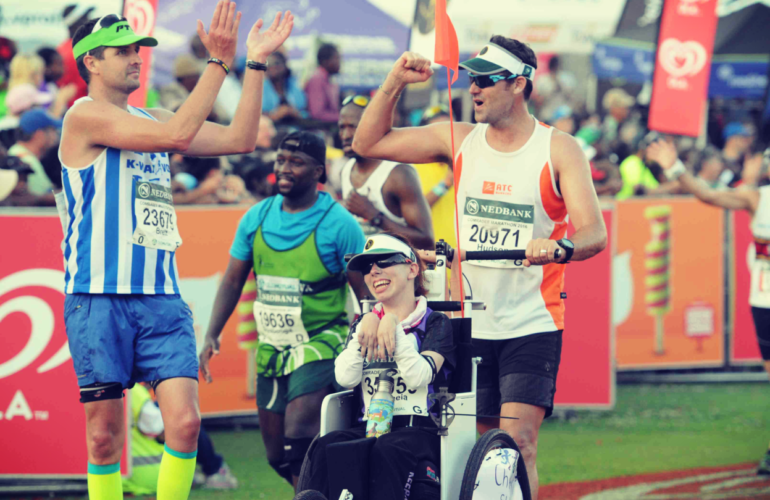 Chaeli (21) has cerebral palsy (spastic quadriplegic) and is currently reading for an Honours degree in Social Policy and Management at UCT. She is an ability activist, international award winner and co-founder of The Chaeli Campaign, a non-profit organisation that provides services to children with disabilities. She has a fierce spirit and believes that people living with disabilities can achieve the impossible if given the opportunity. In September 2015 Chaeli became the 1st female quadriplegic to summit Mt Kilimanjaro.

Anita (23) has cerebral palsy (spastic diplegic) and is currently in her 3rd year of reading for a B Com degree at Stellenbosch University. Anita has become quite the athlete and has participated in three Cape Town Cycle Tour’s, as well as various marathons including the Red Hill Marathon and the Two Ocean’s Ultra Marathon.

Both Chaeli and Anita believe that people living with disabilities should be given the same opportunities as able-bodied individuals. They believe in building an inclusive society for all and they are using their Comrades Marathon as a fundraiser to support the Chaeli Sports and Recreation Club.

There were several aspects that needed to be taken into consideration before being able to attempt the 89 kilometre downhill race from Pietermaritzburg to Durban.Custom-made joggers needed to be purchased and manufactured which are specifically made for each wheelchair athlete.Anita and Chaeli’s running partners participated in several marathons in preparation for the Comrades.

The team has had incredible support and their main sponsor, Duesouth has assisted the team with various aspects including their kit. McCain South Africa have also backed the team in their fundraising drive by supporting their #Comrades4All initiative.

This is what Chaeli and Anita had to say when they were asked about their Comrades experience:

“There was extra pressure on us to do well with this being the first time that wheelchair athletes were participating in the Comrades. Getting a bronze medal proved that we have a right to be part of this amazing race and this opens the door for participation by other wheelchair athletes.

Anita Engelbrecht: The support out on the road was exceptional – thank you to all the runners who encouraged us along the way.”