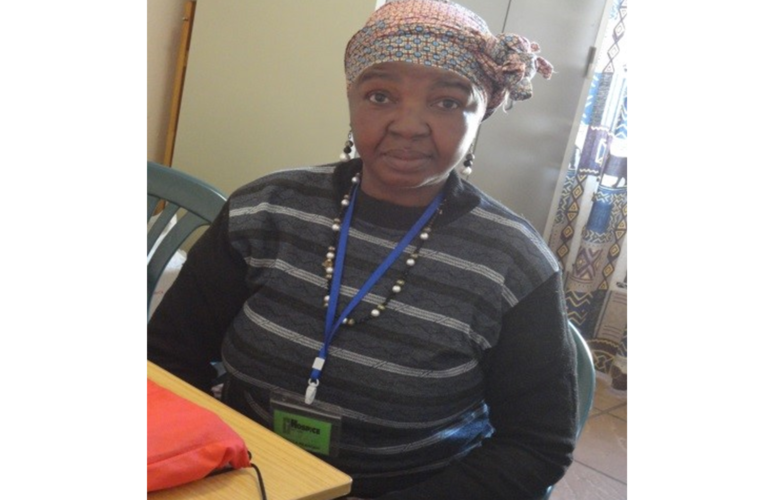 She was the second born child into a family which eventually comprised of mother, father and seven children. The family lived in Vosloorus and her father was employed as a policeman. All the children including Rebecca received a basic education.

When Rebecca’s father died some years later some of her siblings had married and others had moved away leaving Rebecca the only one at home. Her mother who had been at home was now forced to look for work so that Rebecca could finish her schooling. She worked at a crèche in Boksburg and Rebecca used to go there after school.

Some years later Rebecca fell pregnant and gave birth to a little girl in July 1982. The little girl was named Rose. The father of Rose was present only for 3 months before returning to Mozambique and never featured in their lives again. Shortly after this Rebecca’s Mom suffered a stroke and could no longer work at the crèche. Rebecca took over her job while her mother looked after little Rose at home.

Rebecca started losing weight and generally had the feeling of being unwell. That scenario continued until one day she suddenly haemorrhaged! Rushed to the Johannesburg General Hospital she received emergency care and multiple blood transfusions. The verdict was that she had very advanced TB of the lungs She was treated and discharged on medication which included daily injections for 40 days from the local clinic. Rebecca began to feel better …so much so that she thought she didn’t need to take the medication anymore! That was a fatal mistake as her condition deteriorated and she was diagnosed with MDR-TB.  She was admitted to SANTA for a period of 6 months.

After the treatment was completed an HIV test  confirmed that Rebecca was HIV positive. There and then she was commenced on anti -retrovirals. Her daughter Rose became her “supervisor” reminding her constantly to take her meds and generally encouraging and supporting her.

Around this time Rebecca was encouraged by the clinic Sister to attend the newly established support group started by Hospice East Rand.  The meetings were held twice a week in a local church.

Sometime after that in 2006 a house in Vosloorus was purchased  by Hospice East Rand and soon it opened as a drop-in daycare  centre. So Rebecca might be classified as a founder member and indeed her

commitment and loyal steadfastness in the group has been remarkable

Little Rose is no longer little! She is Rebecca’s only child  and  she is a well educated woman trained in aspects of social care and a mother herself of 4 lovely children.

Some years later Rebecca looks the picture of health. She plays a significant role in the lives of her 4 grandchildren. She has become an educator in the community. She has physically helped in the nursing of community members and is particularly drawn to the youth to share her passion. She has learnt her lesson of non compliance the hard way!

Rebecca’s mantra is “cancer kills, sugar diabetes kills but HIV does not kill.”

That is the opening door to a conversation that exposes her passion,  her witness and a deep concern for humanity as she shares the reality of her lived experience.

Without a doubt her winning smile, attitude and charisma is making a difference in her community.   Well done Rebecca!