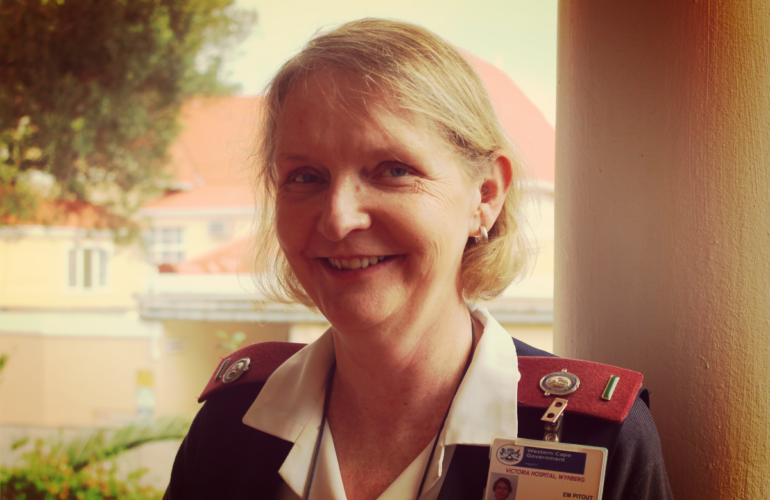 Today we catch up with Sister Elizabeth Pitout, palliative care nurse for Abundant Life who has at least 41 years’ nursing experience. Born in Zimbabwe and growing up in Cape Town, Elizabeth always had a dream of becoming a nurse. She describes that when she was in primary school, she developed a passion for nursing to an extent that while she was in grade 4, she joined the St John’s Ambulance brigade helping out at rugby games on Saturdays.

After her schooling, she followed her dreams and did her nurse training at Victoria Hospital for 3 years where she headed up a ward. She then left and did industrial nursing for an additional 2 years before getting married and moving to the Free- State where she continued doing part time nursing for 15 years -working night duty. A friend enticed her to go back to Victoria Hospital where she continued to do sessional work in the day ward and minor ops theatre.

In 2009 while working at Victoria Hospital, Elizabeth saw an advertisement on the notice about palliative care. At the time she had no clue what they were planning but knew about it as both her mom and dad passed away due to cancer. “I wanted to give back as I knew how important palliative care was for my parents.” she added. After speaking to Dr Cupido about getting involved, it was so ironic that they were at the time looking to employ a palliative care nurse.

Elizabeth started with Abundant Life in 2010 where she completed her palliative Medicine training through Foundation for Professional Development and St Luke’s Hospice in December 2011. She remembers starting with 35 patients and after 7 years with the organization, this has grown to over 260 patients. She explains that at the beginning Victoria Hospital was a little resistant to palliative care but this has changed tremendously. It has now reached the stage where doctors will call her, asking for advice with their patients. A palliative care footprint has now been endorsed in the hospital and more people are getting to know what it’s all about.

One of the biggest highlights for Elizabeth is seeing patients having a good death, free form pain and getting the best care at the same time. She also values her fellow colleagues who is like family to her.