On the road to slowing COVID-19 in South Africa 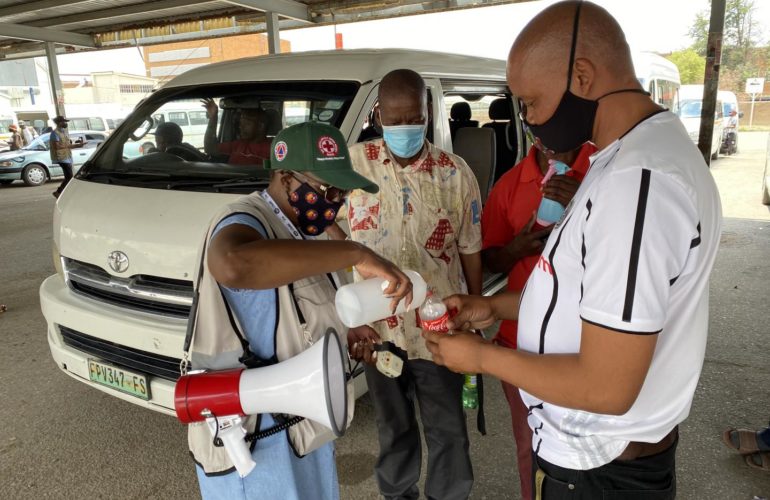 March 1, 2021 | No Comments
Categories: Care, Community Engagement, Featured, and In The Media.

As the pandemic continues, communities are getting reminders about how they can keep themselves – and each other – safe.

KROONSTAD, South Africa – It’s early morning on the outskirts of Kroonstad, about 200 kilometres south of Johannesburg. Three young boys are sitting by the side of the road chatting, but their heads turn quickly to watch a large truck displaying three giant LED screens as it passes slowly by.

“I realized this thing [COVID-19] was real when it took my husband’s life,” says a woman in the video that is playing on the screens, one in a series of messages by locals explaining how they’ve been affected by the coronavirus.

“You might not realise you have COVID-19, but when it hits you it’s devastating, it kills. I plead with others to wear masks,” she adds.

The messages, which are tailored for different areas and languages, are a stark reminder that no one can let their guard down in a country that has recorded the highest number of COVID-19 infections and deaths on the African continent.

The truck continues on its journey to the Kroonstad taxi rank, a busy area where the risk of potential infection is higher due to the crowds. On arrival, a team of South African Red Cross workers fan out to the minibus taxis, relaying the same messages from the truck directly into conversations with the many taxi drivers and travellers. They also put up posters with COVID-19 prevention messages and distribute sanitizer.

This truck activation is part of a partnership between UNICEF South Africa, the Department of Health, South African Red Cross Society and World Vision, and it’s  a vital pillar of the broader national strategy to slow the spread of COVID-19.

Gaeboe, a taxi driver, says he is determined to play his part in keeping passengers safe. “Some people refuse to put on masks, so I don’t let them in.”

But not everyone is so willing to adhere to such safety precautions. Claudia, the Red Cross Free State provincial lead for the day, is trying to convince one young man to use his cloth mask, which currently sits around his neck.

“Some people are aggressive, and they can be rude,” she says, remaining calm despite the man’s apparent determination not to mask up.

Around the corner, at the town’s central post office, a long queue has formed outside. But the level of physical distancing – and mask wearing – is mixed. One man says that many people take their masks off because they feel hot, especially when they have to wait outside – he says he has been standing in line for more than six hours.

Most people are waiting to pick up their monthly COVID-19 relief funds. “I’m scared,” says one post office worker who is trying to get people to spread out based on the faint markers stuck to the pavement. “Some people say there’s no COVID here.”

The team swings into action when it sees the lack of physical distancing, using a megaphone to encourage people to space out; those lined up are soon standing at a safer distance from each other.

Traveling around for extended periods encouraging people to take adequate precautions can be exhausting, especially outside in the afternoon sun. “Every day when I get home I doze off for a while,” says Claudia, as her fifth day on the road comes to an end.

But it’s lifesaving work. With a new and more transmissible strain of the virus reported by infectious disease experts in South Africa, everyday prevention measures are proving even more vital to slow the spread of COVID-19, to reduce the strain on healthcare services and to prevent more deaths. By the first week of January 2021, some 300,000 people had already been reached with these initiatives across the three provinces of Eastern Cape, Gauteng and Free State.

The truck’s next stop is Northern Cape province, where a new set of short films will be screened. The localized approach is a reminder that COVID-19 is a very real threat to every community, but also that when communities are on board with preventive measures there’s plenty they can do to protect themselves from infection.

Original source of article can be accessed here.