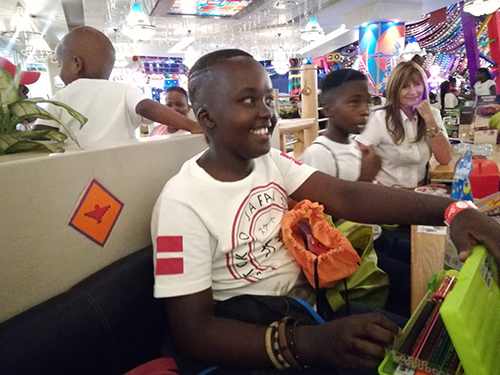 The thing is, he explained to one of the hospice’s psycho-social councellors, Ruby Evrard, his dad promised that he will take him and his little sister to Carnival City in December where they can celebrate their respective birthdays. Amu turned 13 on the 8th of November and little Blessings turned 6 on the 18th December.

Amu was extremely emotional when telling Ruby the story of how, when the family returned from a trip to Mpumalanga early on in the year, they passed Carnival City and how he got so excited with the look of the “circus-like” building. His father then promised that he will take them there where the family can celebrate together.

Ruby could not leave this there and consulted with Clinical Services Manager, Sr Sheryl Newman, who immediately set the wheels rolling. Before too long, funds were raised thanks to a generous donation from the Victor and Koen families, and staff members who donated clothing items, toys, stationery, backpacks and party packs.

Amu and Blessings, together with their mom Suma, aunt Gugu and cousins Bax and Tiyani, were then taken on a day trip by the Stepping Stone Hospice Clinical team to Carnival City on Sunday December 2. The photo’s speak for itself! “We couldn’t save his dad, but we could save young Amu’s dream. And for that we will be forever grateful,” says Ruby.