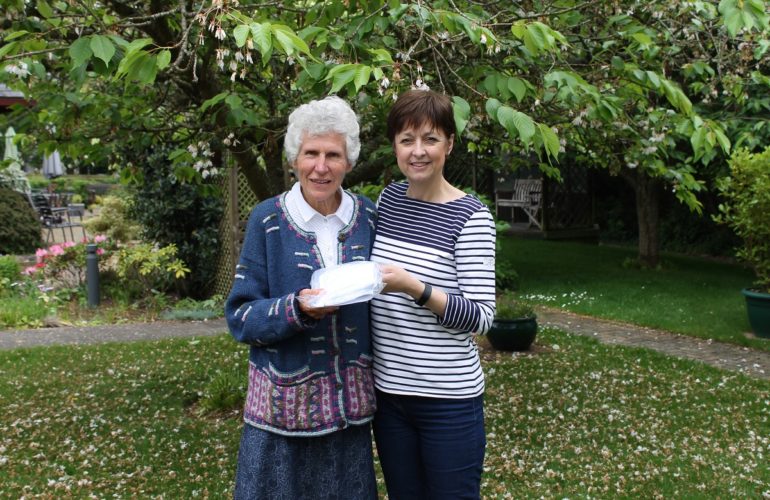 “Liz is amazing. It takes a huge amount of effort to get sponsored for an event and to raise this much is really exceptional.  It is not the first time that Liz has run in support of Hospiscare, Liz has actually run six marathons for the charity and in total, adding this record breaking amount into the mix, so far Liz has raised £43,278!”

When asked how she raised such a large amount of money Liz commented:

“I sent out 126 sponsorship forms with a personal note on each one, and I used the Justgiving website as well as sending some emails. It was lovely to get such wonderful support back.”

“It is also really important to thank people, so as I received sponsorship money I wrote thank you notes in return. I think I sent out 152 of those.  Also people do love Hospiscare and so many have had family or friends cared for by the charity so people are so willing to help.”

Liz and her husband John Searle were the driving force behind the group which established Hospiscare in 1982, when it began with just two community nurses. Liz said:

“Hospiscare has been part of our hearts and lives for almost 40 years. The organisation makes such a big difference to patients and families when they need it most.”

On the experience of taking part in the marathon, she said:

“Running this year’s London Marathon was hard work.  It was hot and I had a bit of a cold, but the crowds of spectators were fantastic and I had the grandchildren there as well to cheer me on.  But it was lovely at the end of the race to stop running!”

She has some advice for aspiring marathon runners of any age group:

“If you have not run before and want to take it up then park runs are a good place to start. You will find people of all ages who run in these so you will not be alone.  If you do that and it gives you a buzz then do a bit more.  There are so many marathons to choose from so look around for one with a flat course and give it a go.”

“You will be so thrilled when you finish and you will be part of a special club of people who ran a marathon.”