A story about Death Cafés 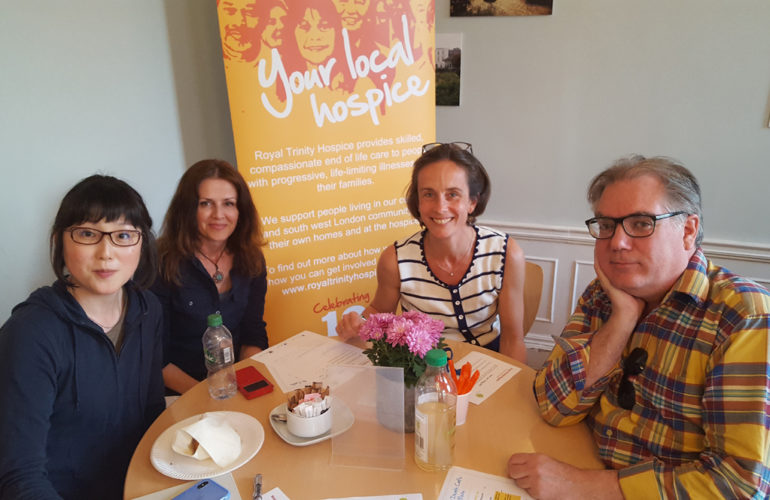 Some organisations have been hosting Death Cafés as part of a community enterprise that hosts people getting together over tea, coffee and cake, to get a conversation going about death. No agenda, nothing more than having a good conversation.

Death, the big “D” has become a “not to be discussed”, and is denied, to be seen as a failure of modern medicine. This denial no longer recognises death as a lifetime’s guaranteed outcome. Regardless of the fact that it is. Death, in the modern world, is seen as dirty, as almost contagious and needing to be hidden and ignored. This is ironic, as we are all touched by death.

In the UK the death rate is circa 500,000 each year; that is 0.75 per cent of the population. With at least five people affected by each death, that is at least 2.5 million people dealing with the effects of death, each year. That is a lot of people facing a taboo. One often supressed, ignored and or medicated via drugs (prescribed or illegal) alcohol, food and changes in behaviour.

At Death Cafés, death takes centre stage, is discussed and explored through personal experience, personal understanding and from a personal perspective. It is not hidden, nor left to fester, confuse and or upset. The tea, coffee and cake help, as does the willingness to engage, be vulnerable and authentic. The conversations explore the topic, involve sharing experiences, asking questions and listening to each other.

These times of human engagement, respect, compassion and showing interest to learn from each other, are rare. They are spaces where it is truly possible to understand what other people value, understand and have the intention to explore with fellows at the same table, one topic that may scare the most in the world. And, that friends, is the space and place that magic and beauty happen.

I signed up for two Death Cafés hosted at two hospices in London: Royal Trinity in Clapham and St. Joseph’s in Hackney. Both were a remarkable experience. Hospices have a unique approach, they do not see death as failure. This is an exception in modern medicine. Their treatment systems focus on supporting and caring for the dignity, of both the individual and their family. Services include in-patient care for respite and stabilisation, as well as end of life. And home-based services, that keep people with terminal illness, supported and independent.

The cafés, hosted in the hospices themselves, made for a lovely conversational atmosphere to explore the ins and outs and effects of death, in a safe space. Everyone understood and accepted what was happening, and the topic being discussed.

At Royal Trinity, four of us, a Soul Midwife, an Integrative Counsellor, a Geriatric Nurse with a university faculty role and a Funeral Celebrant, faced the topic and compared notes, views, cultural differences and stories from our experiences. We spoke, we asked questions and we explored whilst feeling safe, intimate and able to express ourselves, with a comforting ease. It felt we were in it together and this was reassuring.

At St. Joseph’s, we were six gathered to discuss death. A playwright and producer; a Compassionate Neighbour (hospice-led service caring for people in their home as a volunteer visitor); a newly enrolled hospice services manager; a trainee nurse on rotation; a retired nurse from Nigeria volunteering in the hospice, and me, the funeral celebrant. We achieved the same deep exploration of death with interest in each other, with thoughts, emotions, questions and sharing. Once started, the conversation flowed, and everyone really engaged with each other.

What I learned and my takeaways, are that I am excited to be working in my vocation and cannot wait to get my own Death Cafés up and running. There is so much people can benefit from the experience and from sharing with each other. It is going to be awesome!

Before I close, my undying gratitude (no pun intended) goes to those who shared the tables I was on. And, to the hospice teams who made it so special with all their care and attention, throughout.

If you feel inspired to explore death, look at the Death Café website, share with others willing to listen and get exploring one of life’s great unknowns and greatest taboos. There are meetings all over the world, have a look.