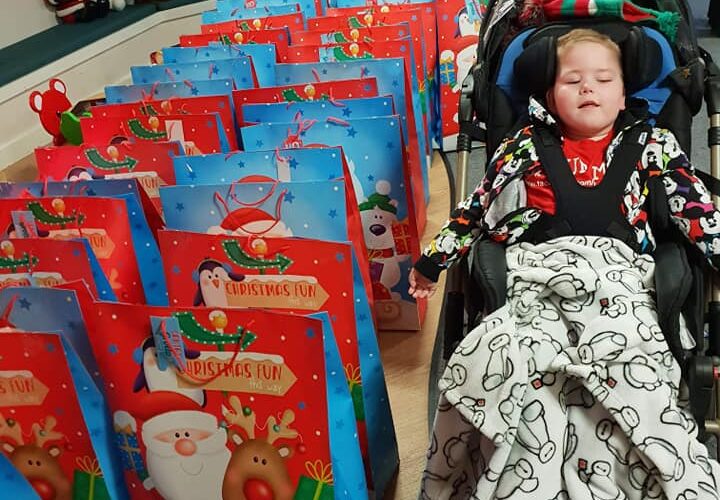 The generosity of staff, local communities, and even fellow patients is helping people being cared for by hospices to have a very special Christmas.

Christmas came early at Phyllis Tuckwell Hospice Care in when DJs Kim Robson and Simon Rose from local station  Eagle Radio visited to hand out gifts to the staff as a thank you for all the work they do  caring for patients and families living with advanced or terminal illness.

“You work so hard all year round and over Christmas, and we thought you deserved to be treated, so we’ve brought you some special gifts!”

A few days later the team from mobile pizzeria Vaporetto popped by to give out free pizzas to the staff, volunteers, patients and families.

To say thank you for the support he had received from locals since he launched his first pizza truck earlier this year, Vaporetto owner James Boyd placed a post on Facebook offering  two hours of Vaporetto’s time for free, during which he and his team would make and give out around 120 pizzas to a local school, church or charity. The post asked people to vote for who they would like to receive the feast, and the most suggested local charity was Phyllis Tuckwell.

Staff at Birmingham St Mary’s Hospice swapped their notepads for musical instruments and surprised patients with a music-filled Christmas party. The hospice’s social workers, bereavement counsellors and volunteers formed a one-off band and performed a lively set of Christmas tunes for patients to sing-a-long to.

As the team played ‘We Wish You a Merry Christmas’ and ‘Jingle Bells’, patients were treated to turkey and stuffing sandwiches and homemade mince pies.

Josephine Walker, who has been using the hospice’s services for 18 months, said: “What a lovely surprise – it’s nice to be able to come down here and celebrate this time of year with other people. There’s been a wonderful atmosphere and I’m grateful that my son was invited to come along too – it’s good to spend time with him, doing fun things.”

Milo Browne, a six year old who has been visiting St Oswald’s Children and Young Adults Service in Newcastle for short breaks since 2014, paid a visit to the hospice to leave gifts for all the patients.

Milo  and his family wanted to say thank you to in a very special way by donating gifts that they collected throughout the year.  This is the second year the family has donated over 500 gifts, and hope the visit will become an annual tradition.

Milo’s Dad, Stephen Browne, said:
“Some of our past Christmases have been spent in hospital with Milo so we know first-hand how difficult this time of year can be for families. Because of this we decided to make sure that children in local hospitals and St Oswald’s have an extra gift to open on Christmas morning. Children at St Oswald’s are not just battling with their conditions at Christmas, but all year round, so giving gifts to St Oswald’s is a way to give something to their little superheroes.

“This year we brought St Oswald’s over 500 gifts that were donated to ‘Our Milo’ and we have been wrapping the presents individually. Some days I’ve been up until 5am wrapping presents while listening out for Milo while he’s sleeping.”

“Christmas is about spreading joy and we know the presents mean so much to families who sometimes have been so busy with their child’s complex health that they haven’t had time to buy Christmas presents.

“There were lots of smiles from Milo giving out the presents and we love that it’s something the whole family can get involved in.”

Footballers from West Ham’s under 23 team visited St Clare Hospice’s in Essex where they took part in a carol service on the inpatient unit and even helped to spruce up the hospice by sweeping the patio.

Four of the footballers visited the hospice’s charity shop in Harlow where they helped sort out donated clothes. They also brought a £1,000 donation to the Hospice, which they had raised throughout the year.

“It was a humbling experience for our footballers to come and help today; seeing the strength and courage of the patients and the dedication of all the staff we met has been a profound experience that will hopefully stay with them. It was also a lot of fun singing and joining in with the hard work that goes on here.

“At West Ham football club we are committed to making a difference to people in our community and raising awareness of the important work that local charities such as St Clare Hospice are doing to help people when they need it most. Hopefully our visit today has done exactly that.”