Are we ready? ehospice speaks to Paula Chandler 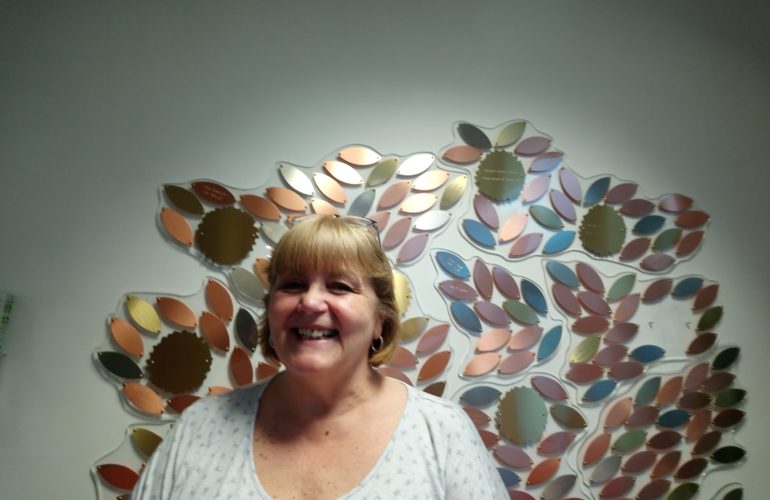 If you were told you only had a few weeks to live, would your family and friends know what kind of funeral you want? Do you feel comfortable talking to them about what your final wishes are? In short, are you ready? Paula Chandler, Facilities Manager at Hospice UK, tells us about having a hot pink-themed funeral with Elvis Presley songs, laughter and tears.

I started making plans after my sister and I spoke about what we wanted our funeral songs to be. We discovered we’d randomly both chosen the same Elvis Presley track, so we started joking about wanting to die first so people wouldn’t think we’d stolen the other one’s song. I’ve never had a problem joking about that sort of stuff.

I want an Elvis song called ‘If I Can Dream’, and it’s absolutely wonderful if you listen to the words. Then there are a couple of others I’m debating, one is ‘Who Wants To Live Forever’ by Queen. These songs will be on while people are arriving, and then there’ll be another one for going out. I’d really like another Elvis one called ‘American Trilogy’, however I’d quite like a more upbeat song too, a bit more like ‘Rock-A–Hula Baby’.

I’m accustomed to quite big funerals. I’m from quite a big family and I do find it really sad when it’s a small funeral. I know it’s a terrible waste of money but I feel really sad when I see funerals without flowers, so I want flowers and I want lots of people, and I want them to go on to somewhere afterwards to have a laugh because there’s always a funny side. I’ve been at funerals where I’ve had to hold in the giggles because something will strike me as funny.

People often say they don’t want anyone to be sad, but I do – I want them to cry! I want to know they’re going to miss me. I can imagine one of my friends in particular getting up and saying, “She was such as pain, she fell over wherever we went. We’re going to miss her falling over on holiday”. Half our holiday pictures are of me falling over. I want that memory to remain.

I’m still debating whether I would like a theme, and I don’t mean like Disney, but I saw the end of one last week and everyone was wearing an Arsenal shirt. I’m absolutely obsessed with hot pink, so I’d quite like everyone to have a little touch of that. I wouldn’t necessarily want some old bloke to be in hot pink, but a tie or something would be nice.

I want my loved ones to know they haven’t got to worry about money for my funeral. I’ve had several family members die over the years and each time everybody struggled to pay for the send-off. I’ve got an over-50s plan that I’ve been paying into so that this won’t be a problem, it’s really important to me.

I became responsible for the funeral arrangements for a close friend recently. When we went to book the funeral we couldn’t make a firm date until we’d paid in excess of £1,000. That got me worrying about other people, how do they manage?

Dying is a hard thing to talk about. My sister is 75, ten years’ older than me, she doesn’t have a funeral plan at all and nobody’s ever talked to her about it apart from her granddaughter once.

I’ve had conversations about dying with friends as well as family, it seems I’m always talking about it, at home and at work! People do have fears though. Lots of other people tell me not to talk like that, but why? We’re not going to live forever, and who would want to anyway?

Unfortunately my son is one of the people who tells me not to talk about dying. I’ve said to him he’s going to have to think about it at some point because inevitably, unless there’s an accident, I am going to die before him.

I don’t feel scared of dying, and I don’t dwell on the fact of dying and being upset. But I think about my two grandsons, and that I’d hate to leave the place in a mess. My friend Charlie was very blasé about dying at first but he became very frightened towards the end, once he knew it was imminent. Who knows whether I will? The thought of being in pain for a long time would worry me if I thought about it.

I’ve thought about decluttering. I try not to have too much anyway. I’ve already reduced my paperwork and I get rid of clothes, but it’s a shock when you realise how many pots and pans you have.

The friend whose funeral I arranged a few weeks ago had various mental health issues and had been in care as a kid. He wasn’t exactly a hoarder except with paperwork. He was homeless 18 years ago and then I met him, and he still had all the paperwork from that time. He was a very private man and I know there would be things he wouldn’t want me to know, so I just think that if I’ve got anything I don’t want other people to know about I need to get rid of it, as it’s not fair on them.

I want my ashes to be buried along with the rest of my family’s in south London. I want someone to take them there and bury them themselves, not pay for someone else to do it. My dad, brother and nephews are there, and every year in June we have a memorial service.

The first time I went to a crematorium I had questions, like are we getting the right ashes? It’s so organised and regulated. We asked what happened to people’s metal hips and joints, and they said they used to bury them in a service every so often, but they don’t bury metal in the ground anymore so instead they get melted down and re-used. There was a little room with loads of ashes that hadn’t been collected and never would be, and every so often they are buried by a small non-denominational minister. It’s respectful, and knowing this really put my mind at rest.