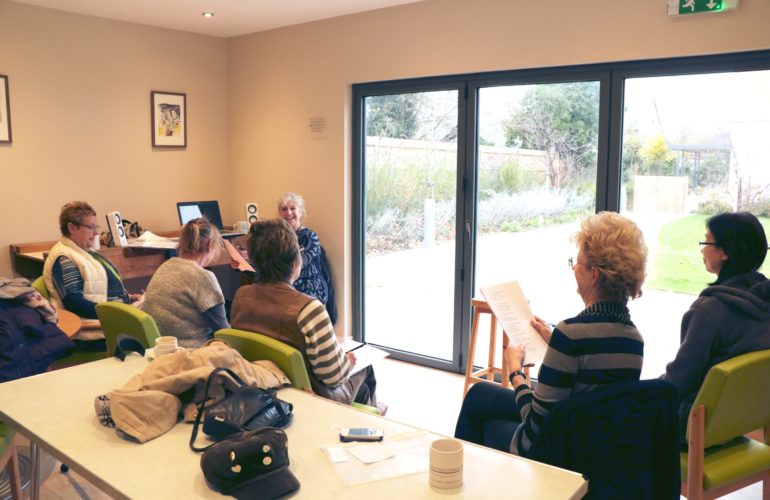 Sharon Allen, chief executive of Arthur Rank Hospice in Cambridge, writes about how the charity’s in-house choir is helping to increase their profile while providing an uplifting activity for staff and volunteers to take part in together.

In 2016, Arthur Rank Hospice established ‘Arthur’s Shed’, a community space inspired by the Men’s Shed movement. Located in the hospice’s beautiful gardens, it provides a space for people who use any of the services or have connections to the hospice to come together and take part in a variety of activities.

One of the activities which began in 2018 was a singing session led by Julie, who now leads the well-established Skylarks choir. Originally added to the programme as a drop-in group, these early sessions were for the general public and hospice colleagues. However, many colleagues who wanted to join in were working during the day, so Julie was approached about providing an additional singing session in the evening.

Julie readily agreed and asked the group to come up with a name. With great enthusiasm, everyone shared their suggestions and in true democratic tradition, a vote was held. The group of staff and volunteers agreed that they wanted to adopt Skylarks as their name, as the birds are renowned for their song.

Skylarks meets on alternate weeks and have already had several outings. They performed at the hospice’s Summer Fete, during the annual Celebration Evening awarding volunteers for long service, appeared at Thank You parties in the Bistro and at Christmas sang festive pieces on the Inpatient Unit.

Skylarks’ most recent performance was at Hills Road, a local Further Education College, where they presented ‘This Is The Moment‘; a fundraising concert to raise money for the hospice. They raised a magnificent £600!

The choir has also collaborated with another local choir, ‘Cloud Nine’ and together they are now preparing for another concert, ‘Songs for Summer’.

They sing a selection of music, often from musicals such as ‘Les Misérables’, ‘Hairspray’, ‘Godspell’, and ‘The Greatest Showman’, to name just a few, as well as a vast array of popular music.

One of the Skylark’s aims is to sing at social events, to raise both money and the profile of the hospice. Members are proud to be part of this. The choir also facilitates socialisation between volunteers and staff, as well as the hospice’s house-keeping staff who are around in the evening and report feeling ‘lifted‘ by the sound of colleagues rehearsing.

One of the choir’s members recently summed up their feelings about being part of Skylarks, saying:

“I find that the choir is great for providing ‘fun and laughter’ which is often much needed at the end of the day. We enjoy singing and have really surprised ourselves with our achievements to date!

“It is a great release being able to direct our energies into performing, and I am pleased to say that we have improved a great deal since we started back in Nov 2017.”