“Bluebell Wood gave us the chance to make precious memories” 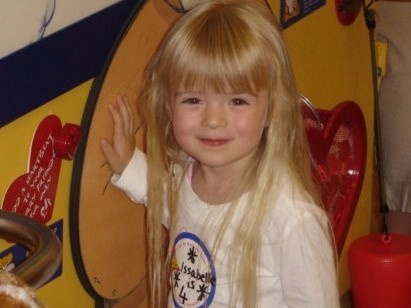 When seven-year-old Issabelle Futter died of cancer, staff at Bluebell Wood Children’s Hospice in Sheffield ensured her family would have a keepsake to always remind them of her.

Issabelle was a beautiful, courageous girl who had been fighting neuroblastoma, a childhood cancer, for three years. Her parents Wendy and Andrew, along with her brother Benjamin, were by her side every step of the way and spent precious moments together at Bluebell Wood Children’s Hospice in Sheffield in the final moments of her life.

Wendy said: “After we found out her cancer had spread, we were all keen to come to Bluebell Wood. It is such a tranquil and calming place, and coming here gave us the chance to be a family again. We were all together the night Issabelle passed away; we could see she was peaceful and comfortable and that was so very important.”

After Issabelle passed away, Bluebell Wood’s Activity Coordinators, Diane and Catherine, made casts of her hands which Wendy and her family could keep. Wendy said, “I didn’t realise this was something the hospice did, but it really was amazing. They’d made these beautiful detailed hands which we could hold, and they asked if we wanted to keep a lock of her hair. These have become treasured items for us now.”

“We’ve also got a canvas made up of all of our footprints, and when Molly came along we added her footprints to them too. It’s the only thing we have of all five of us together as Molly wasn’t born when Issabelle passed away.

“Coming to Bluebell Wood gave us the chance to make precious memories and also have these wonderful keepsakes. If Issabelle had been at home or in hospital when she died we wouldn’t have anything like that. It was what we needed.”