In The Media Book review: When Breath Becomes Air - ehospice 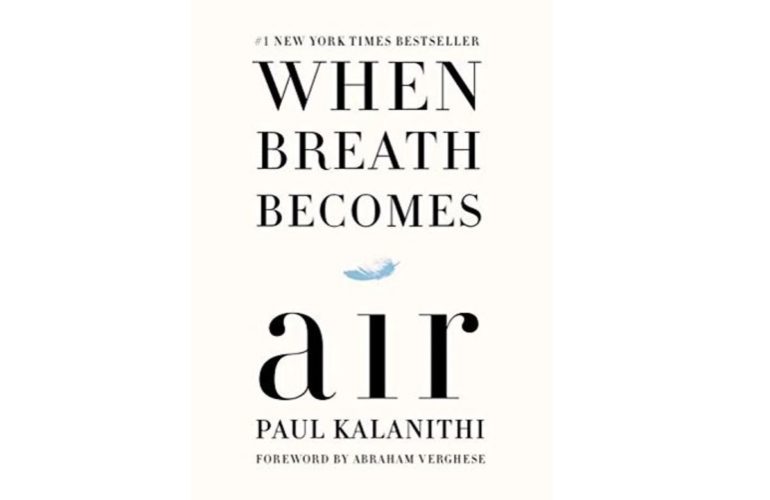 There seems to be a renewed interest in how others face their mortality – or maybe we have always been interested? How doctors face mortality is particularly intriguing though, as we imagine that doctors might magically find ways to defeat death.

And if they can’t defeat death then maybe, just maybe, they will know how to deal with it and can teach us a few lessons. So we have learnt recently from Oliver Sacks’ writing in his final year and now this memoir of a neurosurgeon, ‘When Breath Becomes Air’, is on the bestsellers list.

Dr Paul Kalanithi’s pathography (the new name for illness narratives) is a poignant and effortless read describing his motivation to become a neurosurgeon, his insidious symptoms of lung cancer aged just 36, how he and his extraordinary wife Lucy dealt with the practicalities of a terminal illness, their decision to have a child together and Paul’s eventual decline and death.

Lucy writes the final chapter, breath by breath, an account of Paul’s final days. She describes his trust in his hospital team, the need to lie together in his final hours. She tells us how their baby Cady slept with them in hospital – intimacy is possible in the most acute of settings if there is the will.

I am starting at the end as I was lucky enough to briefly meet Lucy Kalanithi when the book was launched at Waterstones in London a few weeks ago. She talked about language being a “supernatural force”, that words are “touch points” that have allowed Paul to become “indelible”. Lucy is also a doctor and described Paul and her decision to have a baby, even though they knew he was dying. They came to the conclusion that “life is about creating meaning, rather than avoiding suffering”.

Another of her comments stayed with me. She said that it was quite unusual in modern times, that she should be talking so openly about her husband’s illness and death. Normally conversations with widows would focus on anything but – and the ‘late’ husband would not get a mention. But Lucy has found it really therapeutic to keep Paul’s name alive by having permission to discuss him and share videos on Twitter. This is my first lesson. Talk about those who have died – we are sometimes too fearful to mention a name for fear of upset.

As a doctor, I found the prologue difficult to read. The gradual unfolding of Paul’s symptoms, leading to a diagnosis of widespread lung cancer many months later. At every mention of a symptom, I was urging Paul to see a specialist – the sweats, the pain, the weight loss. But what Paul describes so well is the magical thinking and the rationalisation of what was happening. Working too hard, missing meals, stress – and possibly a deep-seated unconscious knowledge that if this was cancer, then actually it was probably already incurable.

Paul was a polymath, interested in identity and consciousness. The first part of the book describes his student journey, initially literature at Stanford and then philosophy of science at Cambridge. He then realised that medicine was the career that was going to help him with his quest to discover “what makes life meaningful”. The trials and tribulations of being a medical student are enlightening and strangely he talks of being particularly struck by one of his teachers, Dr Sherwin Nuland. Nuland was a lecturer at Yale Medical School, where Paul and Lucy were studying, and his seminal book, ‘How We Die’, clearly influenced Paul then and of course later when he was facing his own death.

Paul describes his choice to become a brain surgeon, which was influenced by his insatiable need to understand humanity. He felt that by becoming intimate with the physical structures of our brain, there would somehow be greater understanding of consciousness. He said neurosurgeons work in “the crucible of identity”. He worked extremely hard as a surgeon in training, getting most satisfaction from “guiding a patient or family to an understanding of death or illness”.

At the same time he also learnt from a colleague who was battling with illness: “how little do doctors understand the hells through which we put patients”. In summary Paul understood that doctors meet patients at “moments where life and identity are under threat” and that their duty was to discover “what made that patient’s life worth living”.

However, his oncologist streadfastly refuses to be pinned down on prognosis, remains optimistic, gets Paul back to work and demonstrates her expertise in supporting Paul both as a doctor and a patient, helping him find a new life, rather than rebuilding the old one. Paul turned to literature again as a sustaining force during his treatment. Further insight into Paul, the man, the husband, the person are beautifully described in his sisiter-in-law’s blog.

For those of us working with dying people, Paul teaches us many lessons. He describes how what matters to him changes as time goes on. He talks about death as a one-time event, but “living with terminal illness is a process”. He mentions that even when “cancer was in retreat, it cast long shadows”.

Paul’s final pages describe the time with his new baby and Lucy, “double-edged time”, further from his last relapse but closer to death. I learnt a great deal from reading this book, about life, death and the universe. Paul says: “words have a longevity, I do not”. His words will stay with me for a long time. I recommend this book to all – it’s a death story but also a profound love story.