Breaking the taboo of sex and disability 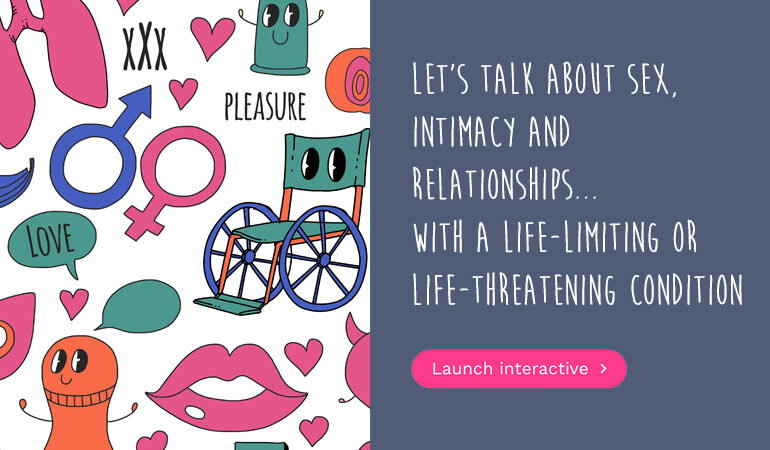 An interactive tool recently launched aiming to break the taboos surrounding the sexuality of young adults with life-limiting conditions has launched. We talk to co-author Dr Maddie Blackburn about the project.

In a set of four short videos, eight young adults discuss issues like being allowed privacy to spend time with their partner in a care home, and the physical challenge of having sex despite being wheelchair-bound. The stories are not salacious – they are honest accounts from real people talking about their experiences, with the aim of highlighting the difficulties of balancing their sexuality with a disability.

These have been put together with the help of young adults with a life-limiting or life-threatening condition, who are co-researchers and members of a group called the AdversiTeam.

The new resources are part of an ongoing project that dates back to 2014, when Dr Maddie Blackburn and colleagues formed The Open University’s Sexuality Alliance. “We produced some guidance and standards, and then we did a study on emotional wellbeing and sexuality. Meanwhile I was finishing my PhD on the sexuality of young adults with life-limiting conditions, so some of the findings emerge from all of those pieces of work.”

The videos feature key issues that came up time and time again in her research. “There’s a married couple where one person has Duchenne muscular dystrophy and the other has another form of muscular atrophy. They’re both wheelchair users and they talk about how they can have a fulfilling relationship, and its practicalities” she explains.

“There’s another video about the role of carers, and how someone employed her sister because she felt she was more understanding of her needs than carers, who are quite prudish about sex aids and nice underwear.”

Privacy is a big issue. “Some people have spent time in residential care, and we looked at how their freedom, for that cognitive person, is often withdrawn and how they manage that.”

One of the videos features Junior, a man in his late 20s who uses a wheelchair and has had a tracheostomy. He talks about wanting his girlfriend to stay over at the care home he’s staying at, but the staff wouldn’t allow them to have time alone. In the clip he says this left him feeling “angry, frustrated. I felt like my freedom was taken away. I didn’t feel normal.”

“He had to sign a consent form about what he could and couldn’t do in his room” Maddie says. “It’s a really interesting dilemma about his choices. He felt disenfranchised.”

Central to the project is the fact that these young adults have a sexual identity, and are entitled to feel good about it. “There is a lack of access to the appropriate information about sex and sexuality. It should be lifelong learning. Some people with a profound disability have been so busy with hospital appointments they may actually need information later in life, but have been told they wouldn’t reach adulthood and it wasn’t necessary to them. That was the message they often were given, and some of their parents felt the same.”

“Sex education is still pretty ableist, and anything to do with sex and disability is still taboo. These are people who were not expected to reach adulthood, so they’re on an uncertain life course. They’ve defied medicine – many reach their 20s and 30s, and probably longer. It shouldn’t be swept under the carpet, but it still is.”

With this work, they want sexuality in young people with life-limiting conditions to be seen as part of natural human development, and accorded the same respect as in people who are able-bodied. “At the moment it’s not, and that’s what young people have told us time and time again. Sexuality is part of their own identity, regardless of their life-limiting condition.”