CarePeople & Places “Dad’s death is the saddest memory of my life, but also the most beautiful” - ehospice

“Dad’s death is the saddest memory of my life, but also the most beautiful” 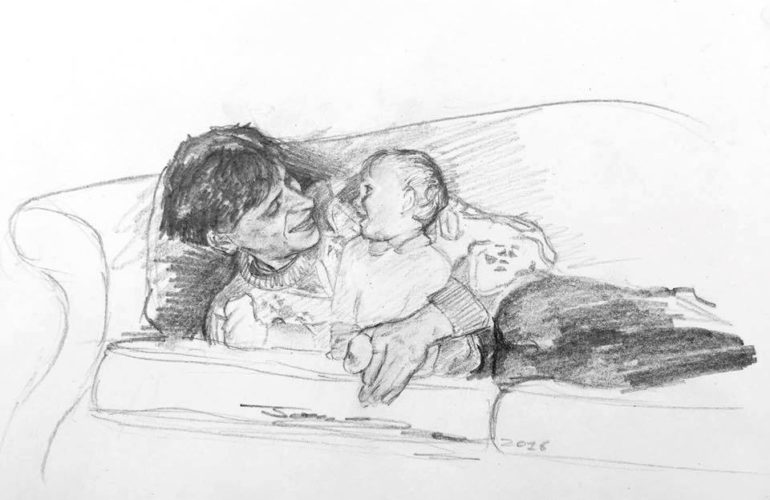 To mark Fathers’ Day this Sunday, 26-year-old Joanna Wenczka shares her memories of her dad and reflects on the care he received at St Catherine’s Hospice in Crawley.

My dad Antony was really funny. He was known as Tony and he always made people laugh. Dad and I were always very close. He was a stay at home dad when I was a baby, and my very best friend. I could talk to him about anything and we used to play video games, make Lego and ride rollercoasters at theme parks together. Our inside jokes and laughing together are two of the things I miss about him the most.

Although we were close dad enjoyed his alone time too. He’d spend hours out in our garden, garage or shed making things and was a perfectionist in anything he did!

In 2013, Dad hadn’t been acting like himself and had began to feel more tired. He worked as an aerial fitter so at first we thought he’d spent too much time in the cold, or had hurt himself on a roof or something. But soon after he started having blackouts. We realised afterwards that these were actually seizures.

Dad went to the opticians, and while he was there they saw a mass behind his eye. After a trip to the hospital doctors discovered that the mass was in fact a brain tumour. Following a CAT scan, they found that he had cancer in his lungs too. That was his primary cancer. His brain tumour was secondary. So by the time dad found out that he was ill his cancer had already spread.

I was in my final year at Southampton University studying animation when he was diagnosed. I found out he had terminal cancer during a phone call four days before my 21st birthday. He told me, “It’s going to be okay. We’ll get through it, as a three, me, you and mum.” But at the time it didn’t really sink in what “terminal” meant.

St Catherine’s first became involved in dad’s care when a hospice nurse came to our house to chat to him. He was determined to fight his illness but he’d started having complete memory blanks and was struggling to control his emotions. It was hard for me and Mum as we knew that wasn’t how dad really was, but his brain tumour was changing him. It was like he was trapped in a body and mind that didn’t feel or act like he wanted it to. It was awful to watch, and made me and mum feel utterly helpless.

When dad deteriorated our doctor got him a bed in the hospice. We were very lucky really. Mum and I were at breaking point caring for him by then, and things were really difficult as dad wasn’t capable of making the decisions he needed to because of his tumour.

I rode in the ambulance with him to the hospice, and mum followed in the car behind. It was hard leaving the house as we knew he was saying goodbye, and we all knew he wasn’t going to come home again.

When we arrived at St Catherine’s he was given a private room. He liked seeing the garden and he had a lot of visitors, lots of people loved him! At the hospice, nurses gave him such dedicated care. They became more like friends for mum and me. Things felt cosy there, and being at the hospice gave us time to be a family again. At home, we’d been dad’s carers but at St Catherine’s, Mum could be Tony’s wife again, and I was able to be his daughter .

One of the most special memories I have of dad’s time at the hospice was when the nurses helped my cousins and aunties set up a streaming device so that from his bed he could watch me graduate from university.

He’d had a bad night the night before and was really unwell by then. But as I was graduating I looked at all the cameras so he could see me. It made such a difference knowing he was watching, and it meant a lot to him too. After the ceremony, my cousin texted me saying ‘Your Dad’s seen it’ and it meant the world to me. Looking back I think dad was holding on for this, because he died the very next day.

When Dad became ill I was given the option to defer my final year at university, but he was so proud of me I decided to continue. He used to tell everyone I was studying animation and he was always very supportive. He never missed anything important either despite being so unwell. There was even a time that he attended a chemotherapy session in a suit so he could come straight to Southampton to see a showcase of animated films afterwards. That’s the kind of dad he was.

When dad died mum and I were with him, together like we’d always been. A nurse was in the room with us but she was gentle and calm, and didn’t intrude on our precious time. She told us what was happening so we could appreciate every moment, and she encouraged us to talk to him. I remember telling him I loved him, and all three of us holding hands, one on top of the other.

At one point dad was scared, but he calmed down the moment mum went over to him. I’ve never ever seen so much love as I did in that moment. Dad had nothing apart from mum and I right then, but I think he felt rich. Although his death is the saddest memory of my life, it’s also one of the most beautiful. I’m lucky that I know how much my mum and dad loved each other, because I saw the love.

After he died I felt empty, but relieved he wasn’t in pain anymore. Mum and I stayed with him and the nurses didn’t move him until we’d gone home, which was very respectful. They also allowed his family to visit him in the hospice’s Chapel of Rest, which was important for them as Catholics.

Nowadays mum and I keep dad’s memory alive together. Every year we have fireworks and hot dogs for his birthday as he used to love doing that, and we mark other special days together. I like to remember dad through my artwork too, and every year on his birthday I draw a picture of us together. I draw from real photographs as they help me to remember what he looked like before he was ill. Whenever I’m drawing I take the time to really study his face, as I’m always scared that I’ll forget what he looked like.

I still really miss his encouragement of my art. He told me to keep doing it so I’m taking part in St Catherine’s upcoming HeART to Heart art trail this summer too.*

Since dad’s illness I appreciate how precious my life is now. I take more time to appreciate the little things that make me happy and to enjoy everything, because he can’t anymore. It’s a gift that’s come from my sadness. In life people don’t always realise how lucky they are. I don’t feel lucky that I lost my dad, but I feel lucky for everything I’ve learnt from it.”

Dying Matters is a campaign run by Hospice UK that works to create an open culture that talks about death, dying and bereavement.