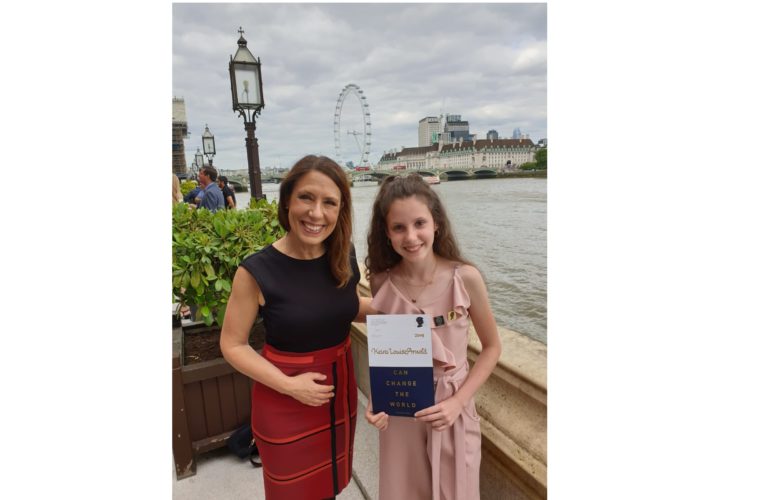 An 11-year-old fundraiser for Dr Kershaw’s Hospice in Oldham has won an award for raising over £14,000 in just three years.

Keira-Louise Arnold went to the House of Lords to receive the Diana Award, created in memory of Princess Diana. It is the highest accolade a young person can achieve for social action or humanitarian efforts, and this year it celebrates its 20th anniversary.

Keira lost her father to cancer at the age of four, and for the last three years has been fundraising for Dr Kershaw’s Hospice. She set up ‘Keira’s Wishes’, a fund to help pay for the last wishes of patients at the hospice, recently honouring one patient’s wish for one last trip to the seaside to dip her toes in the water.

Keira engages with the local community and uses Facebook to help promote her cause. So far she has raised over £14,000 by taking part in sponsored events and designing goods for sale, including dream-catchers and poem bookmarks.

“Keira set up her special fund, “Keira’s Wishes” to pay for the last wishes of patients, and is determined to help and find time for others. Keira is unassuming, never asks for recognition, and is a real asset to her school, our town and certainly our hospice.

“We are so very grateful to Keira for her constant efforts and support which she so willingly gives, supported by her loving family and friends. Well done Keira – you really are a star and we are so proud and delighted that you have received the Diana Award.”

“We congratulate all our new Diana Award Holders from North West who are changemakers for their generation. We know by receiving this honour they will inspire more young people to get involved in their communities and begin their own journey as active citizens. For over twenty years The Diana Award has valued and invested in young people encouraging them to continue to make positive change in their communities and lives of others.”

Award winners are put forward by adults who know the young people in a professional capacity and recognise their efforts as a positive contribution to society. There are 13 Diana Award Judging Panels representing each UK region or nation and a further two panels representing countries outside of the UK.

The Award is given out by the charity of the same name and has the support of both her sons, The Duke of Cambridge and The Duke of Sussex.