Family star in BBC One’s Countryfile for Children in Need 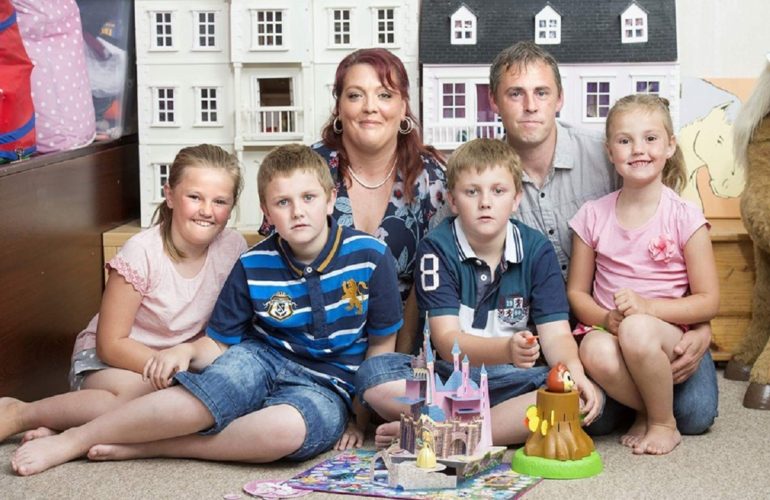 Jody and Dee Penn along with their children and the support they receive from specialist staff at Acorns Children’s Hospice in Worcester, were part of the programme’s launch of the Countryfile Ramble for BBC Children in Need.

The Penns will take part in one of the campaign’s official rambles in October, alongside members of the public and Countryfile presenter Adam Henson.

Three years ago, twin boys Toby and Corey Penn, aged 14, began to experience problems with their eyesight. The problem was initially put down to an eye condition, but in March 2015 Corey had his first seizure and tests revealed the boys were suffering from juvenile Batten Disease.

Children with Batten Disease experience devastating symptoms that worsen over time. Mobility, speech and feeding skills fall away, leading to severe disabilities. There is currently no cure and no way to stop the progress of the condition.

As it is a genetic disorder, the family’s other children were also tested. Sibling Izzy was also diagnosed with the condition, while Amber was not.

“As parents we know we are facing an uncertain future so we just try and make the most of every day as a family. Acorns is the children’s happy place. It is somewhere we can make precious memories together and make their lives as fulfilling as possible. It also means we can have a break and spend some special time with our daughter Amber.”

Acorns supports the Penns with a Family Team Worker called Penny who is also interviewed in the Countryfile film. Penny’s role is to provide a broad range of support providing whatever help the family needs, whether it is advice and advocacy or just a listening ear.

Amber is supported through the Acorns Sibling Service and attends a sibling support group at the hospice.

BBC Children in Need gave a grant of £103,020 to Acorns which has enabled them to run a three-year programme called Letting Go and Moving Forward. This scheme enables the Penns and other families in similar situations to access information and advice on their available choices in health, education, employment and housing.

“We were thrilled to feature on BBC’s Countryfile this year and it is wonderful for us to be able to raise awareness of the vital care and support we provide to so many families across our region to such a large audience.”

“It costs us £10 million every year to run services for families like the Penns and we simply would not be able to continue without the generosity and fundraising from the local community.”

“We are full of admiration for the Penn family, and my thanks to Dee and Jody for bravely telling their story and the difference we have made in their lives in such an unimaginably difficult situation.”

“Our gratitude also goes to BBC Children in Need and their continued support for Acorns, providing the funding necessary for the Letting Go and Moving Forward programme.”