Hospice chosen to represent Harrogate on new Monopoly board 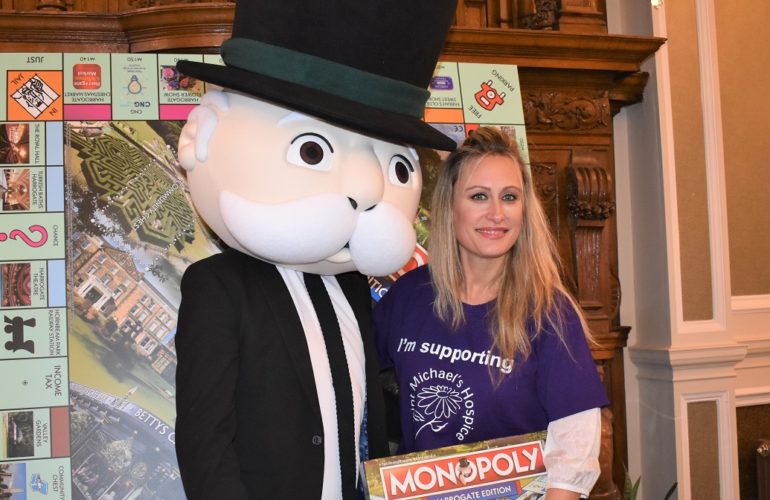 A hospice in North Yorkshire has been chosen to feature on a new version of Monopoly following a public vote.

The local community of Harrogate was asked to nominate the charities which they felt deserved to be recognised in this way, and Saint Michael’s was one of the most popular.

Cora Purnell, Director of Saint Michael’s community relationships team was invited along to an exclusive launch to receive a special copy of the classic board game from Mr Monopoly himself.

Cora said: “Saint Michael’s has been providing care, comfort and support to families living with terminal illness in the Harrogate District for more than 30 years. So many people in the Harrogate area know someone who has used our services and we are fortunate to be well-thought of and much loved in our community.

“We’re very proud and excited to play a part in this iconic game which celebrates our beautiful town.

“It’s a great opportunity for us – we know that many, many people are touched by hospice care. Now, every time people play, they will think of us and may be inspired to find out more about what we do and how they can support hospice care.

“We hope a generation of younger people who may enjoy this game may grow up with awareness of Saint Michael’s and our services.”

Saint Michael’s is not the first hospice to feature on a Monopoly board – in 2018 North Devon Hospice developed their very own version of the game, and subsequently won Hospice UK’s Innovation in Income Generation Award. Read more about how they put it together here