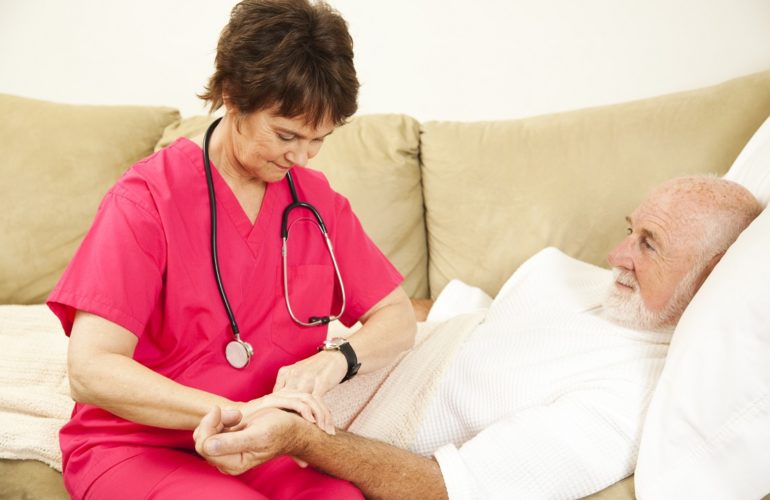 The night-time call-out service provided by Nottinghamshire Hospice has extended its reach so it can care for more people.

The Hospice Night Support service, launched in Nottingham a year ago, provides practical care and emotional support through the night to patients and carers requesting urgent help, preventing traumatic emergency hospital admissions in the last days of a person’s life and helping patients to stay in their own homes.

Last year the hospice received funding from the End of Life Together partnership plus a £1 million grant from an anonymous donor to extend the service across the mid-Notts Clinical Commissioning Group area. This enabled it to recruit four more healthcare assistants and operate up to three teams each night, as well as purchasing two vehicles.

One user of the service is Margaret Nussey, 85, who had lived independently for 22 years since her husband died, until she was diagnosed with metastatic melanoma last October.

She was taken into hospital but was keen to get home. A care package was put in place with carers visiting during the day, but this left her alone at night.

Margaret’s sister Dorothy, who lives 12 miles away, is severely disabled and was not able to stay in the house with her, so Nottinghamshire Hospice stepped in to help with its Night Support Service.

Margaret’s niece Stephanie, who lives in Hampshire with her son and daughter who both have autism, said: “The hospice support was a lifeline. If it hadn’t have been for them my aunt would have been on her own from 7 pm to 9 or 10 in the morning and it terrified mum that something might happen in the night.

“My aunt was very independent. She was used to living alone and walked three miles a day before she got ill. She said she wanted to die at home and was adamant she didn’t want anyone sitting with her all night, so the Hospice Night Support service was just right for our needs. Words can’t describe the peace of mind it gave my mum and me.”

The hospice team were able to check on Margaret at night, make sure she was comfortable, and in one instance, when Margaret’s health took a dip, based themselves at her home for the rest of the night while they co-ordinated other calls from there.

Margaret lasted through Christmas and died early in the new year. A member of the hospice team arrived soon afterwards, and alerted family and healthcare agencies.

“The lady from the hospice was absolutely fantastic. She phoned the doctor, the district nurses, my mum and me, and she stayed till my aunt was taken away and secured the house. It would have been awful if my mum had found her in the morning. She wouldn’t have known what to do.”

Stephanie welcomed the news that the night support service is being rolled out across the mid-Notts area.

“There are lots of people in the area like my aunt who don’t have family close by. Not just older people, younger people as well, who are cut off. This service is vital. It’s an absolutely invaluable resource.”

Rebecca Winfield, a Senior Healthcare Assistant recruited to the team in December, said: “It’s important for patients to know they’re not on their own. We’re only a phone call away. We can help with any situation, whether someone needs help getting out of bed or if they need emotional support.

“It’s a great service. It’s inclusive and it’s free, which is a relief to a lot of people who worry about the cost of care.”

Since the Hospice Night Support service was launched in December 2018 it has responded to more than 4,000 callouts with teams visiting up to 12 patients a night. It has helped prevent hospital admissions, enabled patients to be discharged from hospital, and supported them to die at home with friends and family around them.

Jo Polkey, Director of Care at Nottinghamshire Hospice said: “We’re delighted to be able to extend the service as it has been so well received elsewhere. Our aim is to help people live as independently as possible for as long as possible and this service enables this. It also provides an extra layer of support for patients and families, easing the pressure on overstretched NHS services.”

Last year CNN journalist Dominic Rech spent time on the hospice’s night shift for an article on how end of life care is provided in the UK. Dominic is running the Virgin London Marathon to raise funds for Hospice UK in April.