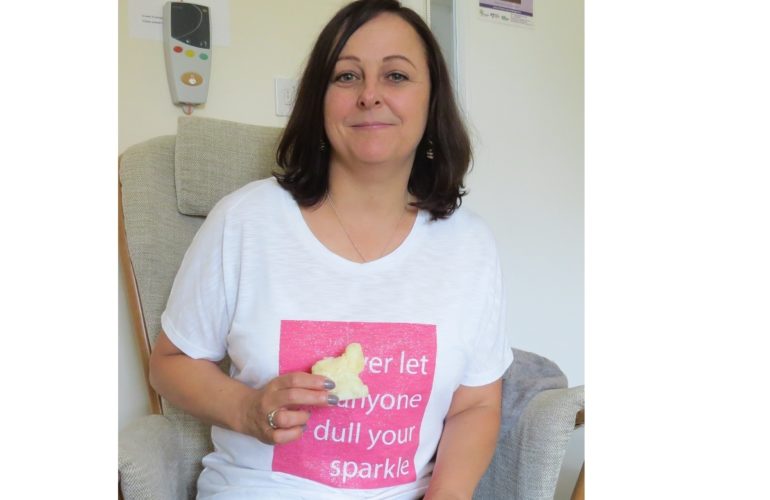 I have always been a people person and I was passionate about helping anyone in a difficult place or who was struggling. My work, first as a counsellor and then as an employment advisor for Hertfordshire County Council helping adults with disabilities get into paid employment, meant I  had always been in a caring role.

But after being diagnosed with breast cancer and undergoing a double lumpectomy I fell into quite a dark depression. For a long time I did not want to leave the house. Whenever I did go out I felt like everyone was looking at me or people were expecting me to be how I had always been – bubbly and outgoing. But all of a sudden I did not want, or feel able to be like that. I could not see the point of anything anymore and I could not explain that to anyone.

There was no history of cancer in my family, so when I was diagnosed it came totally out of the blue. About 18 months earlier I had tripped at the top of the stairs and slipped three discs in my neck. That was the beginning of my health problems.

In February last year I went to see my doctor because I felt tired all the time. I thought I had low iron because of the medication I was taking for my neck problems. I mentioned that my right nipple kept popping in and out and the doctor immediately referred me to a breast clinic.

I did not think anything of it. I thought I was having an early mammogram because I was in the early stages of menopause but when the doctor told me she could see a lump under my nipple, suddenly everything slowed right down and it was as if she was talking about someone else. I was in complete shock. I thought I needed iron tablets but the next thing I knew I was having tests for breast cancer.

They did a biopsy and when the results came through I was told it was cancer. An MRI scan found a second smaller lump deep in the tissue. I was looking at a double lumpectomy and possibly a mastectomy.

The double lumpectomy was a success but it was at that point that depression really took hold. I had lost trust in my body. It was like stepping on a landmine and a bomb going off without warning, and I had no idea if there were any more out there. I also was not sleeping properly. I felt so tired but I could not quieten my mind. I was horizon-scanning all the time but I did not know what for.

One of the Macmillan Nurses recommended that I go on a HOPE (Help Overcoming Problems Effectively) course at the Peace Hospice. It was there that I saw a box of soaps that said “please take me home.” Each soap had a little note on it saying what to do. I took a block of lemon soap which smelt amazing.

The note said to carve the soap into a shape that represents how you feel. I had never done anything like that before but I did not think about it too much, I just did it. I thought I would like to make a tortoise because it represented exactly how I felt – outside I had a shell, I looked fine and well, but inside I felt completely at odds with how people perceived me. I still could not understand or believe what had happened to me and I felt totally trapped and lost. Everything was going so fast and everyone was going about their business as normal, but I felt a total mess and just needed to take life slowly.

In January this year I had a call from Annalie Ashwell, a Macmillan Wellbeing and Therapeutic Coordinator who works at The Hospice of St Francis and Peace Hospice Care. She asked me if I would like to help come up with a narrative and make an animation film with all the soaps. I was thrilled that someone wanted something from me, that I had purpose and a direction and could do something helpful.

The Art Bag project has massively helped me find myself again. It has helped me to get out there and try life again. It is a new challenge and something completely different to what I am used to. It has also given me the chance to meet and talk to people who have gone through a similar experience.

Helping to come up with a story with all the soaps that people have carved, and create an animation film with them was the first step on the road to becoming me again. Seeing something through from start to finish, and doing something to help other people at the beginning of their diagnosis realise that there is help out there meets a need in me. This project has helped me to realise that I have something worthwhile to contribute to society.

It also feels very purifying. Soap is for cleansing and this project has helped me to break down the debris that was left from my illness and pull me through to the other side. I am grateful to be where I am today. This time last year I could never have believed I would have come so far.