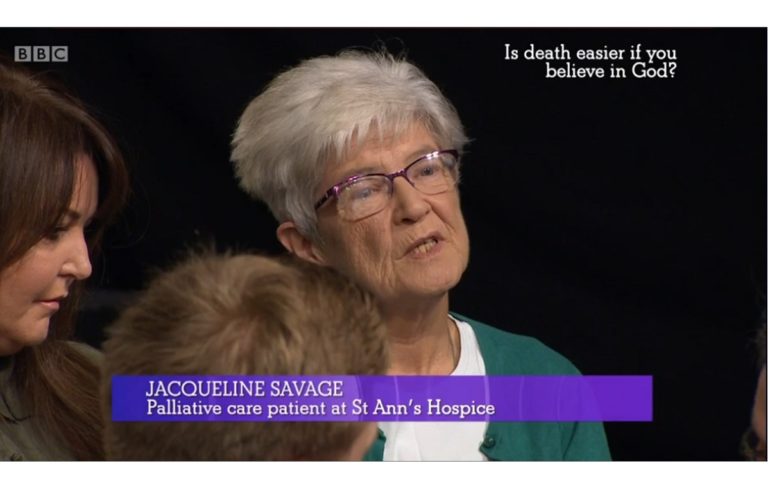 The Sunday morning show is hosted by Nicky Campbell, who poses ethical and religious questions to panellists and the studio audience.  Is death easier if you believe in During the segment on faith in God and dying, Campbell turned to Jacqueline and asked:

“What are your thoughts on facing death? Where do you get your strength from?”

“For many years I’ve been carried on a blanket of love and prayer by a lot of people, many of whom I don’t know. In September 2014 I became very ill, and it turned out I had an unusual ovarian cancer which had tangled itself in my bowel and stuck to my bladder. Because everything was blocked up, I was in imminent danger of death.”

“I reached this point of imminent danger of death about half a dozen times in the last two years and nine months, and it’s quite a scary place to go. But the blankets of love and prayer strengthened and uplifted me in the darkest times. Far from being afraid of dying at those times when it became most imminent, I felt a joy and almost an eagerness to go. That was mitigated by the sadness of leaving those that I loved.”

“I am convinced that there is a God, a great good powerful God who loves us beyond all telling, loves every one of us.”

“If I am wrong and there is nothing but an endless sleep beyond death, I would be happy with that.  There would be no pain and suffering, no injustice and no war.”

“If I am right, all the people who do not believe in God, I hope they are going to get a wonderful surprise.”

“Jacqueline’s appearance on the programme was incredibly powerful and we cannot thank her enough for agreeing to take part.  It was obvious that those in the audience found her story extremely moving, as I did, watching from home.”

“As we all know, hospices support and care for the whole person, including spiritual needs, so to hear Jacqueline talk about her experiences in this way will hopefully give comfort to others too.  If, following this national exposure, people think about how hospice care might be able to support them or a family member, we would all be delighted.”