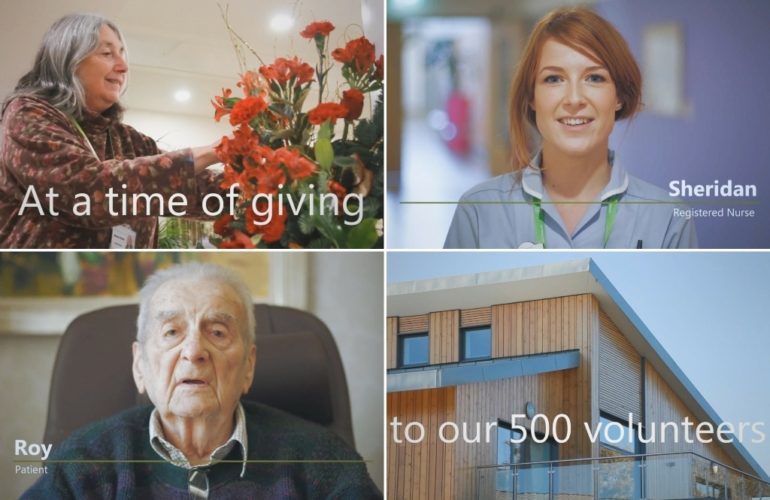 Arthur Rank Hospice Charity has shared a film thanking their volunteers for the invaluable support they provide.

The film was created, filmed and produced free of charge by production company Mill River TV, who spent two days filming at the hospice on separate occasions in order to capture as full a picture as possible. In the course of filming they interviewed patients, family and staff members, recording personal thank you messages from each.

As well as illustrating how vital their 531 volunteers’ support is across a diverse range of roles, the film shows the warm welcome received by patients, family and friends.

Since the hospice moved to a new site the number of volunteers swelled to over 500, with roles growing to include meeting and greeting in reception, assisting with care on the Inpatient Unit, flower arranging, helping in one of the charity shops, out in the community ambassadorial roles, and behind the scenes office support.

“Our volunteers really are at the heart of everything the hospice does. Alongside our staff, they are integral to creating the warm, welcoming and homely atmosphere that Arthur Rank Hospice is so well known for. It’s wonderful that Mill River TV have been able to capture that on film and we were thrilled to be able to send our volunteers such a lovely thank you message this Christmas.”

Having visited the hospice before filming began, Katie Crawford-Owen, Director / Co-Founder of Mill River TV, explains why they decided to focus on thanking its volunteers:

“I wanted to make a film for the Arthur Rank Hospice as a small thank you for the kindness and support they showed our friends’ whose son was recently in their care. When I went to meet with staff to discuss the project, I was bowled over by the friendly and welcoming response from everyone I came in to contact with.

“It was immediately clear that the hospice’s volunteers really are an integral part of the team and that they contribute so much to the warm atmosphere that surrounds patients and their families. I felt it was important to acknowledge and thank them for all that they do. Working on this project was a very humbling experience and my team and I were very happy to be able to give something back.”