Hospice supporter raises over £100k thanks to skydive 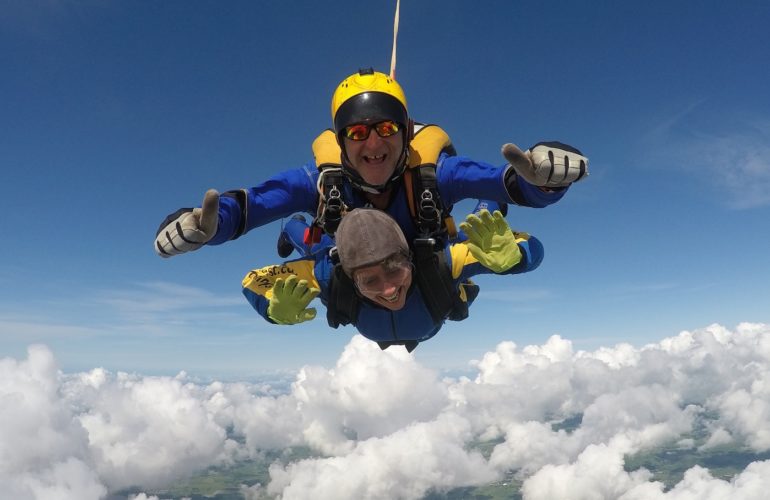 The Principal of a dance and theatre school has helped raise over £100k over almost two decades for Francis House Children’s Hospice in Manchester.

With a love of children and a passion for dance, Lynda Cardwell has inspired hundreds of families. The Cardwell Theatre School, based in Altrincham, Cheshire, has been nurturing young musical talent for more than 40 years. From tiny tots to teenagers, former students regularly perform in West End Shows and classical ballet companies, and even go on to run their own dance studios.

Lynda, who is Principal Examiner for the International Dance Teachers Association (IDTA), heard about Francis House from a parent of a pupil whose sister regularly used the hospice for respite care.

“The children that come to the theatre school are fortunate in so many ways, and the children at Francis House face such enormous difficulties” Lynda explains. “I thought it would be good for the pupils here to know about the hospice and to appreciate what other families face, so we started fundraising.”

For 18 years the theatre school has held an annual performance in aid of Francis House, raising thousands of pounds.

Earlier this year in what Lynda, 63, describes as a ‘mad moment’ she decided to jump out of a plane in order to further boost support.

“I typed my plan to do a skydive into the theatre school newsletter which then committed me” she says. “I’m terrified of heights and not a great fan of flying but it seemed like a good idea. A great response came from the board of directors of the IDTA – they really liked the idea of me jumping out of a plane and donated £3,000.”

Lynda’s brave feat has boosted the fundraising total to a staggering £106,000.

Watched by her son Simon and his young family and her other son Gary via mobile phone in Australia, Lynda made a perfect landing.

“I wasn’t nervous on the day. I think the theatrics took over as there was a camera and I thought I’d better smile.  I loved it and wanted to do it again, but I woke up the next day and every part of my body was in agony – including my teeth!”

Lynda’s family has had first-hand experience of the support of a hospice, and her late husband took part in social events and repairs around the theatre school. “Tony was as passionate about raising money for Francis House through the school as I was – he supported it 100 per cent.  The thing with hospices is that everybody in that building just gets it. The other people know what you are going through, the staff understand you, people don’t talk in whispers and will give you a hug when you need it.”