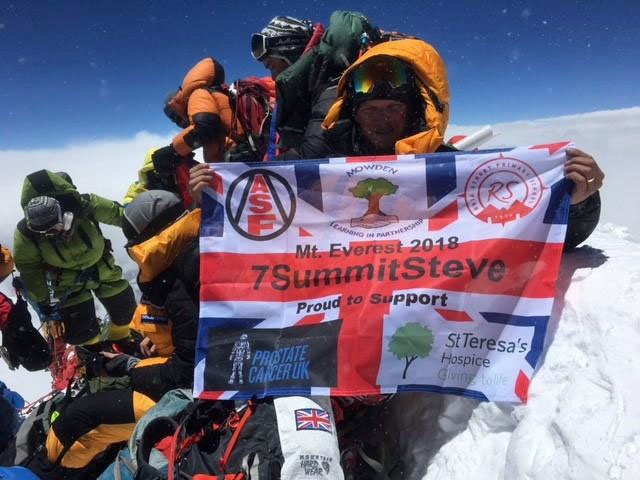 An intrepid explorer and hospice supporter was unable to collect an award for his fundraising efforts because he was busy climbing a 16,000ft peak in Antarctica.

‘Seven Summit’ Steve Graham was being awarded the Worldwide Supporter Award by St Teresa’s Hospice in Darlington in recognition of his support for the charity, which has included climbing Mount Everest. This expedition alone raised 15,000 for the hospice and Prostate Cancer UK.

His current adventure sees him tackling Mount Vinson, the highest peak on the coldest and most windswept continent on Earth. Reaching the base camp requires a 14 hour flight and a trip on a Russian cargo plane which has to land on a natural blue ice runway.

“Steve is currently in a vast ice desert where the cold is extreme and storms regularly roll in. We don’t present this award very often but he certainly is the worthy winner of our Worldwide Supporter Award.”

Members of Reid Street Primary School received an Excellent Support Award for a project that embraced the efforts of Seven Summit Steve by studying his explorations, recreating in the playground the number of steps he took to reach the top of Everest and making a papier mache mountain, raising almost £3,200 in the process.

The awards were presented at the hospice’s AGM, during which Jane Bradshaw also paid homage to the hospice’s founder who died in September. She said:

“Sadly, this year we lost Yvonne Rowe. All good causes start because someone shouts and Yvonne was the person to raise her voice when she asked the newspapers whether we should have a hospice in Darlington.

“She was our inspiration. It was a privilege to know her, to spend her last days with her and to speak at her funeral. She was a kind, intelligent, unassuming and humble lady who shouted and that is the reason we are here today.”