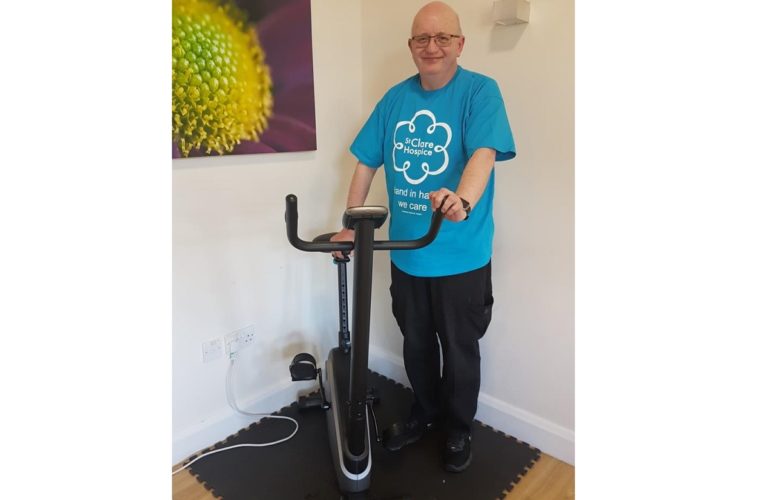 Ray Cogan is taking part in two races this month: he competed in the Paris Marathon on April 8, and will be running in the London Marathon on April 22. The competitions are part of his challenge to run 13 races in 12 months to raise funds for the hospice.

The 35-year-old father of two is taking part in a race each month for the whole of 2018 in honour of his close friend Dave Ramm, who received care from the charity in 2015. The challenge will see him cover over 250 miles throughout the year, plus an estimated 1,500 in training miles.

Ahead of the Paris Marathon, Ray said:

“I have already taken part in two races so far this year – the Ashridge Duathlon and the Roding Valley Half. But April will be my toughest month yet, with two marathons just two weeks apart. This will be my first time running in Paris and I am excited to be running past the Arc de Triomphe and the Eiffel Tower – hopefully I am not too exhausted by then to appreciate it! I have run the London Marathon twice before but it really is the best race experience in the world – so I am really excited to run it again for St Clare.”

Reflecting on the care his friend Dave received at the hospice, he said:

“The staff and volunteers at St Clare did so much for everyone, not just for Dave, but for his friends and family as well. I was so impressed by the level of care and compassion from all the people that work at St Clare – especially the volunteers. That is why I am doing my part to help St Clare by fundraising this year.”

“I think it is fantastic that Ray has decided to take on a whole year of challenges to fundraise for St Clare in honour of Dave. Especially running two marathons in two weeks in Paris and London – that is no mean feat! I am sure that Dave would be so proud of his friend for doing this for him and I hope Ray raises as much as possible for the hospice so they can continue their incredible work.”

Meanwhile David Hannay will be doing a seven-day distance marathon cycle challenge, starting April 16 and finishing April 22, the same day as the London Marathon. This will see him cycling 26.2 miles each day at Pure Gym in Harlow, Essex.

He is taking part in the race in memory of his mother, who was cared for at St Clare before dying there last December.

“I have been going to the gym for about a year and a half now and have really been enjoying the buzz that I get from exercising. I often ride the spinning bike and that is how I came up with the idea of cycling a marathon seven days in a row. After my mum received such great care from St Clare in December last year, I really wanted to come up with a way to repay the help we were given through such a tough time. I have received so much support from the guys at Pure Gym – with some of them even volunteering their time to help train me because they think St Clare is such a great cause.”

David works night shifts five nights a week, which adds an extra layer of endurance to the challenge. He explained:

“I will be doing the week-long challenge whilst still working a whole week of night shifts at the bakery! I work from 10pm to 6am, I will then come home and walk my dog, and then go to the gym to cycle the marathon distance. I know I can do the distance, because I have done it lots of time in training, but it will be the act of having to cycle day after day for seven days that is the challenge! I did not used to do much exercise so this is also a big personal challenge for me. I am not the type of person you would normally imagine doing something like this!”