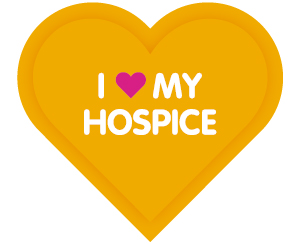 Today Hospice Care Week kicks off, with Hospice UK and hospices across the UK encouraging the public to support their local hospice in whatever way they can – whether by donating, volunteering or showing they care on social media.

This year’s theme is “Heart my Hospice.” Hospices across the country will be celebrating the week by holding awareness-raising and fundraising events and encouraging members of the public to share these using the hashtag #HeartMyHospice.

Like many other hospices Mountbatten on the Isle of Wight will encourage people to wear or eat something yellow to raise funds in support of hospice care. The hospice’s Sunflower Café, which is open to everyone, will be getting involved by creating delicious yellow cupcakes, while Mountbatten’s ten shops will be theming their window displays in the sunshine colour. The yellow sunflower is the symbol of the hospice movement.

The Sue Ryder Leckhampton Court Hospice in Gloucestershire has created a colourful woollen garden known as the Work of Heart Garden. The garden was the idea of Clare Young who wanted to do something to raise awareness and funds for the hospice after it cared for her husband Ken. She has received over 50,000 knitted hearts for the garden which has recently been rebuilt for Hospice Care Week.

In Scotland a Hospice Care Week exhibition at the Scottish Parliament has already received lots of positive attention from MSPs, including the Cabinet Secretary for Health and Sport Jeane Freeman, and Ruth Davidson, leader of the Scottish Conservatives.

Hospice shops on high streets from Basildon to Balloch will see their front windows transformed for the national awareness week as part of its Hospice Shop Challenge. Hospices will be invited to dress their shop windows with bunting and creative decorations in keeping with the heart theme.

Hospice shops make up the majority of charity shops in the UK – there are around 2,000 across the country that help raise vital funds for hospice care.

On Tuesday Hospice UK will have a stand in the concourse at King’s Cross station, with staff handing out goodies and encouraging people to say why they value their local hospice and share this using the campaign’s hashtag #HeartMyHospice

On Thursday at 1pm Hospice UK is encouraging hospices and individuals to send out a ‘Thunderclap’ in support of the week. To join in, just copy and paste the following into a tweet: I #HeartMyHospice. And for #HospiceCareWeek we want you to know just how amazing #hospices across the UK are. They support hundreds of thousands of people every year, in all sorts of ways. Visit the @HospiceUK website at www.hospiceuk.org/hospice-care-week, find out more and add your support.

The British public is very supportive of hospices and has considerable goodwill towards their work. Hospice UK is hoping to build on this further to encourage people to actively support their local hospice.

More than nine in ten people (92 per cent) say that hospices are “an important asset to their community” according to an earlier ComRes survey commissioned last year by Hospice UK. More than half of those surveyed (52 per cent) have interacted with a hospice in some way, such as donating money to help support hospice care (27 per cent).

“Hospices have a special place in people’s hearts, especially for those who have seen first-hand the incredible care they provide to loved ones.

“Like other charities, hospices are operating in a difficult economic environment and many are also facing additional challenges, such as those related to staff recruitment. So, it has never been more important for people to support their local hospice.

“We hope that during Hospice Care Week the public will take up the opportunity to show their affection for hospices wholeheartedly and demonstrate their support in practical ways whether donating, volunteering or spreading the word about hospice care on social media.”