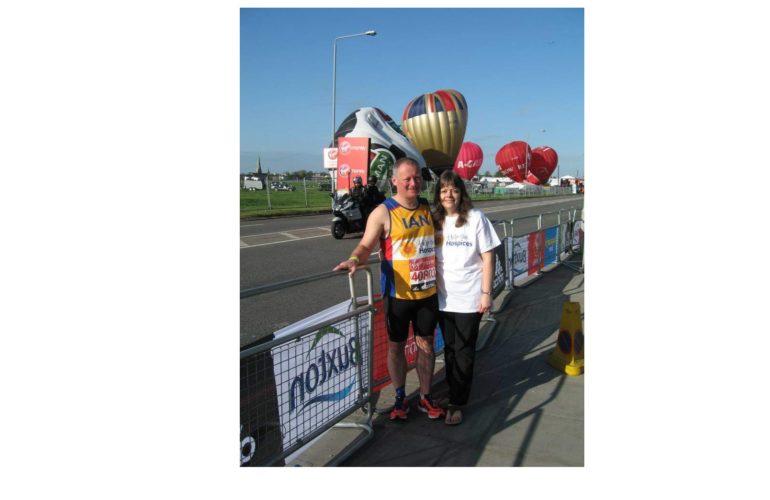 Ian Webber is set to run his 18th consecutive London Marathon in April – his eighth for Hospice UK. Along with his wife Jayne Webber, the couple have raised a formidable £60,000 for hospice care over the last 17 years.

Ian first ran for Hospice UK in 2005, when the charity was still called Help the Hospices. He has also previously run for cancer charity CLIC and Childrens’ Hospice South West among others.

“The work of hospices is a cause very close to their hearts, having lost family members and friends through cancer, some of whom have been cared for by local hospice services” Jayne said. “Sadly cancer has touched so many of our lives again this year.”

The couple chose Hospice UK because as the national charity for hospice care in the UK it meant their local charities in Devon would benefit from their fundraising. “The support that we have both received from the events managers and team has been truly amazing. It makes fundraising for such a wonderful charity a real pleasure.” Jayne said.

“As a Devon runner, knowing that Hospice UK supports the work of our local Children’s Hospice South West, Hospiscare in Exeter, North Devon Hospice, Rowcroft (The Torbay & South Devon Hospice) and St Luke’s Hospice in Plymouth) remains very important, that every penny raised makes a big difference to all the children and adults who need hospice care in our localities” Ian said.

Additionally the couple host a number of other events, the main one being their Coffee Morning and Silent Auction, held in March.  “We have gained quite a following and have become well-known in our locality for the event!” Ian said. “For us, it is a social time as well as a fundraising event, time for friends to catch up, to hear how training is going, as well as raising vital funds for our charity.”

“It was wonderful last year to be able to let our supporters know when we were finishing our event, that they had helped us raise over £60,000 over the last 17 years. For the rural area of Devon that we live in, it is a truly amazing thing to achieve and we are so thankful.  Yes, arranging the event is a lot of hard work for Jayne, it encompasses several months of planning, but as we say, you get out what you put in.”

“Our Coffee Morning has a great cake stall – Jayne and her mum spend at least two days baking. Plus we have other donations. We have planted up 90 plants to be sold, and we have a variety of competitions as well as various other stalls, including Jayne’s famous chutney”

For the Silent Auction Jayne contacts over 200 local and national businesses, which usually results in over 30 separate lots. These include tickets to local attractions, handmade items by local craftspeople, and locally made food and drink. Among this year’s items are a pair of Exeter Racecourse tickets and a box of 15 Devon flapjacks. “We are so humbled by the support we receive” Ian adds.