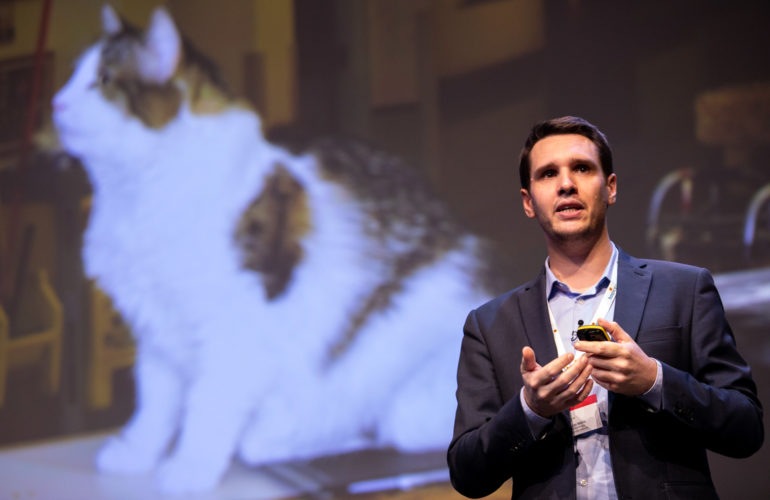 Hospice UK’s National Conference continued yesterday afternoon with thought-provoking talks that covered the life expectancy of the homeless population (47 years for men, 43 for women), the latest in cannabis-based medication in palliative care, and the Revolution workshop, a hands-on session where participants were given ideas to start planning their own radical approaches to end of life care. This workshop was led by Jake Garber, who co-authored the book this conference takes its name from: Dying for Change, published in 2011, set out a vision for the future of end of life care in the UK.

The importance of lived experience

Ian Leech, in his final appointment as Vice Chair of Hospice UK’s People in Partnership (PiP) forum,  chaired a session that looked at the importance of healthcare professionals engaging with patients who receive care and their families.

Lesley Goodburn, Chair of PiP and Senior Improvement Manager in Patient Experience, NHS England, spoke movingly about her late husband Seth and their plans to travel before he was diagnosed with pancreatic cancer. “The world turned black” she said, adding that his death in a clinical, cold setting spurred her to want to make things better for others.

“People weren’t listening or responding to what we wanted” Lesley explained. “People were definitely not learning. The opportunity to use our story was given to commissioners and providers but no one was using it as a learning opportunity. It felt like we were in a desert, frankly.”

Things changed when she became involved with the National Council for Palliative Care (which merged with Hospice UK in 2017). Within NHS Improvement, Lesley has worked on the patient experience improvement framework which focuses on leadership, organisational culture and learning for quality improvement. To raise awareness of this work and to show that improving the patient experience is “fundamental and it’s everyone’s business” the #itsnotpinkorfluffy was created.

At the start of her talk Lesley played a short clip of herself talking, except all that could be heard was a loud buzzing sound. She later revealed this was intentional – it represented the noise the toilet in Seth’s hospital room made every time it was flushed. “The amount of times I asked staff to do something about it, but no one else could hear it because they were all going about their business” she said. She ended by dedicating her talk to Seth’s memory.

Joanna Goodrich, Associate at the Point of Care Foundation, explained that it’s essential for improvement to begin from the patient’s point of view. “Unless you understand what is important to them you will waste a lot of effort improving the wrong things” she said.

For this purpose The Sweeney Programme, was developed, a project that has enabled staff to see care through the eyes of the patients by shadowing their experiences. Joanna shared some of the discoveries of the programme in hospitals in Oxford, Southampton and Bath, which included adapting menus for end of life patients, moving call bells they couldn’t reach, and providing remote controls for TVs.

At Southampton University Hospital staff confidence has increased, meals and additional parking spaces are being provided for relatives of patients and there’s a refurbished family room with a sofa bed. Difficult conversations about death and dying are being managed more effectively; The Conversation Project began at Royal United Hospital Bath in 2013 and has since moved into the community.

At the session ‘Is your culture eating your organisation for breakfast?’ David Robinson, CEO of Derian House Children’s Hospice and Sarah Pugh from Heart of Kent Hospice were both open and honest in sharing their experiences of creating and driving cultural change within their organisations in response to different internal challenges.

David highlighted the need for CEOs to have a really strong vision of what they want to achieve for their hospice and to be bold, brave and resilient in their steps to achieve this. He spoke of how all staff worked collaboratively to develop their ‘We are Derian’ brand, developing new values that they promoted through a staff video and a booklet. He emphasised that this was just the start of the journey and that organisational culture values evolve, and that the work to support and embed these never stops.

Sarah Pugh talked about how she successfully led changes to the hospice’s internal systems and processes, as well as major cultural changes. Following internal consultation she introduced new values and behaviours, embedding these over time and ensuring that everyone adhered to these, including staff, trustees and volunteers. She also highlighted how the transformation in culture has had an impressive impact on the hospice’s work, helping significantly increase the number of patients it supports both in the hospice and the community.

Dr Lucas Morin, a doctoral student at Sweden’s prestigious medical university Karolinska Institutet in Stockholm, ended the first day of the conference with a fact-filled and frequently humorous look at over-prescribing and data.

Doctors have become accustomed to over-use treatments, he said, not just in palliative care but across the board, “we’re providing solutions to problems that are not really problems at all”.  He used the example of atenolol for hypertension, a drug that is “very good at lowering blood pressure, but my colleagues looked at whether this reduction translated into reduction of mortality. People did not have less heart attacks, they just died with better blood pressure.”

Lucas looked at the appropriateness of prescribing in elderly people and whether it was always worth the risk, taking into account what the patient wants and how long it will take the medication to work. He cited studies that looked at what drugs were not adequate in end of life care and which were the top-prescribed medicines: statins, calcium supplements, anti-dementia medication, drugs for osteoporosis, and vitamin C. The important thing to focus on, he said, is establishing whether on average wellbeing and quality of life will be improved.

He then shared the results of a study he did into the effects of bereavement on spouses. He found that men were worse affected, and the impact was harder when the death had been sudden and unpredictable. Bereaved people were also 3.5 times more likely to commit suicide in old age, and 1.5 times more likely to have a heart attack.

We also learnt that cats are better predictors of mortality than humans, who “are really bad at predicting death, about as good as predicting the weather.”