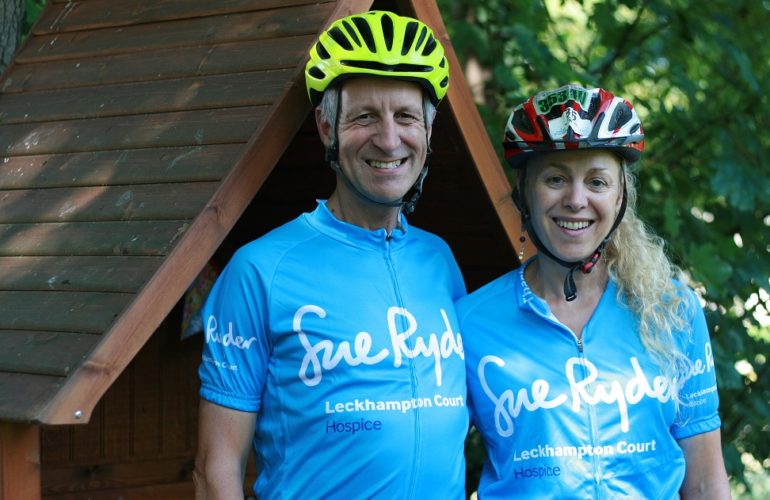 When Sue Kent was diagnosed with breast cancer in the midst of training for a 1000 mile cycle to raise funds for her local hospice, she remained focused and determined by cycling to all her radiotherapy appointments.

Sue was due to take on the Land’s End to John O’Groats (LEJOG) challenge for Sue Ryder Leckhampton Court Hospice with her husband when she received the news she had breast cancer. She said:

“The day I held a big cake sale fundraiser ahead of our planned charity bike ride I had just heard that I had been diagnosed with breast cancer.

“It was so hard telling the children I had cancer as my husband, Simon, battled Hodgkin’s Lymphoma back in 1999 and had been through six months of intense chemotherapy and radiotherapy. We all still have memories of that.”

Sue had an operation followed by three weeks of radiotherapy, and to keep herself motivated during her treatment, she cycled to each radiotherapy appointment. She explained:

“I was determined to cycle to every radiotherapy appointment, no matter how tired I felt. I wanted to keep going and to keep on cycling. I was given the all clear, and ten days after my treatment finished I was back in the saddle on a planned cycling holiday abroad.”

Having rescheduled their planned cycle ride to make sure Sue was fully recovered and fit, the husband and wife duo are now planning to set off on August 27. They are aiming to raise £2,000 for the hospice, as close friends have been cared for there in the past. Sue added:

“Before I had breast cancer I worked as a physiotherapy assistant supporting people with MS and Parkinsons and many of my patients came to the Day Hospice at Leckhampton Court. They all raved about the care they received there.

“Our family and friends are all being so supportive of our charity cycling challenge and we would like to thank them all – especially those like our close friend Nick who is meeting us at John O’Groats to drive us back home. Some people are amazed we are still doing it, but we will not let what has happened stop us.

“After both having cancer we both live for the moment. We only have one life and we plan to make the most of it.”