CarePeople & Places “I never thought of asking for help after my diagnosis, but I’m so glad I did” - ehospice

“I never thought of asking for help after my diagnosis, but I’m so glad I did” 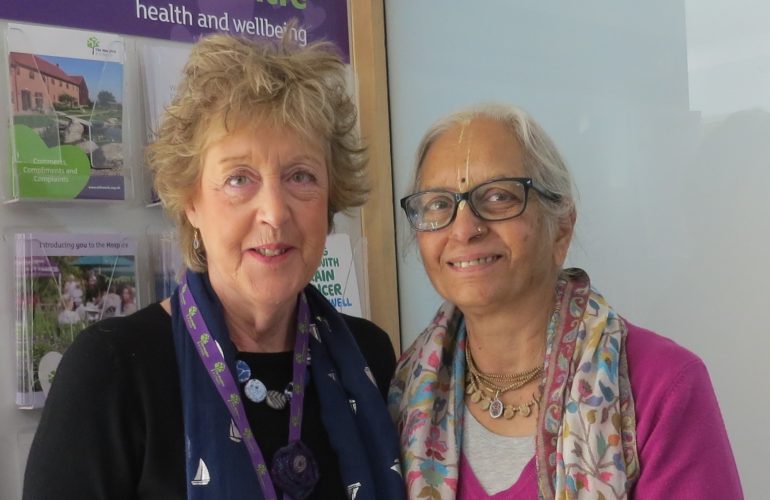 Research shows that not enough people from British and minority ethnic (BAME) communities access expert end-of-life care for a variety of complex reasons. Lila Dhokia was born in Kenya to Indian parents but has lived in the UK for 50 years. She has been supported by The Hospice of St Francis in Berkhamsted since 2015. Here she shares the story of how she learnt to ask for help after being diagnosed with cancer.

I’m very British but also very Indian and our culture is very tight knit. It goes against the grain to share your problems outside the family and potentially leave yourself vulnerable. Also, having been used to helping others in my work, I never thought to ask for help.

I was 65 when I retired from my job as a social worker in December 2014, but six months later, I was diagnosed with stage 4 breast cancer.

I had surgery, as well as chemotherapy and radiotherapy, and for a year I was extremely sick. My husband Vanraj was a great support, but we were struggling emotionally and practically. Two months after my diagnosis, my younger brother Kanti, was diagnosed too and in November 2015 he died.

Three months later, my sister-in-law died of cancer but then the unthinkable happened. In October 2017, on a pilgrimage to Vrindavan in India, Vanraj had a heart attack and died too. He was 69 – the nicest man on the planet. We’d been married for 50 years since we were 17 and 19. It knocked me sideways.

I’ve got three children who live nearby but they all have their families and their own lives and they’re in their own little bubbles. Even though they wanted to help, they’re busy and I didn’t want to intrude or be a burden.

I have a very strong faith with the local Hare Krishna community and lots of friends who were very sympathetic but I felt instead of going up, I was going down.

I just felt incredibly low, yet I was almost embarrassed that with my level of faith and with my life experience, that I could be so shakeable. I felt I should have been able to cope.

It was my District Nurse through my GP who referred me to The Hospice of St Francis for psychological support in October 2015.

Like so many people, I associated the word ‘hospice’ with a place where people come to die and at first I was a little anxious stepping into the unknown.

But the support and understanding I’ve had from day one actually leaves me quite speechless. Coming here was a different avenue. It wasn’t about someone feeling sorry for me. It was about how they could build me up slowly and help me to find me again.

By talking to Julie Scrutton, a Community Clinical Nurse Specialist, I was able to unravel my situation – to see that I was lost and it wasn’t a quick fix. She helped me to see that I was grieving for work and my old my job.

Just as I was thinking about how I might spend my retirement, I had my diagnosis. Then as I was starting to get back on my feet, I lost those closest to me – all in the space of less than two years.

We talked a lot about my huge sense of guilt that as my brother’s elder sister, I hadn’t been able to help him. Because of my chemotherapy, I couldn’t go anywhere in case I compromised my immunity so I couldn’t see him. I felt I’d let him down. I went to his funeral and felt like he’d snatched my ticket – that I should have gone before him.

But Julie helped me to accept that just because you’re older, you don’t always die first – life isn’t like that, it’s out of our control.

I felt I had no purpose or structure in my life and I felt guilty about Vanraj too. He’d supported me through my illness and helped me to recover and suddenly he was gone.

When I came back from India after he died, there was so much to do and paperwork everywhere – letters from doctors, insurance companies, solicitors and bills – but I couldn’t open anything. Having been so organised before, now it felt overwhelming.

I put the house up for sale. I was scared of the dark. I found it really hard going back to an empty house at night.

But Julie told me to be kind to myself, to give myself time and not to rush into making big decisions. I took the house off the market and I started getting a friend to call me when I got home. I used to switch on the TV even if I wasn’t watching just to break the silence.

We looked at goal-setting – doing small things such as spending an hour every other day on paperwork, and we talked about the essentials – like making a start on things.

Coming here gave me a breath of fresh air. I’d held all my emotions in before to be strong for my family but the hospice was the one place I could let it all out without being judged. It left me feeling uplifted.

Without this support network, I don’t know how I’d have coped. I’d probably be on medication for depression but the hospice and Julie have been my medicine.

The hospice hasn’t treated my illness but me as a whole. I feel so much more positive now. My cancer is in remission. I’ve finished all the paperwork. I’ve started re-decorating the house and I’m thinking about doing some voluntary work, maybe here at the hospice so I can help other people facing cancer. I feel very much that what I’ve received in terms of care I’d like to give back.

I didn’t realise I needed their support because I am a strong woman, but with the hospice’s help I’m getting stronger.