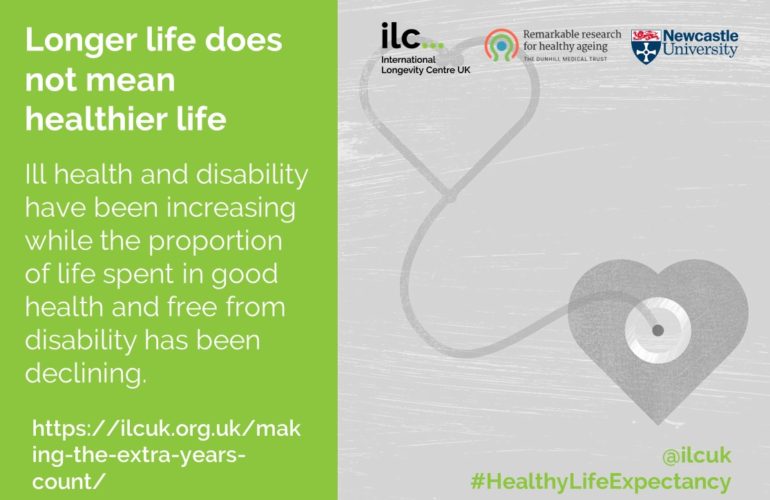 A new report published by the International Longevity Centre UK (ILC), drawing on a research project led by Newcastle University, finds that ill health and disability have been on the rise in recent decades, while the proportion of life spent in good health has declined. The report argues there is need for urgent action to support people to live not just longer, but healthier lives as part of the Government’s plans to build back better from the pandemic.

The report, drawing on research led by Newcastle University and funded by The Dunhill Medical Trust, finds that many measures of life expectancy have improved over the past decades:

But while there have been increases in life expectancy and time spent in good health over the past decades, these gains haven’t kept up with those for general life expectancy. In other words, ill health and disability have been increasing while the proportion of life spent in good health and free from disability has been declining.

In 2019, the UK Government set a target to deliver five additional years of healthy life for all by 2035, which was confirmed in the Conservative Party manifesto ahead of the 2019 general election and reaffirmed in a speech by the Secretary of State for Health and Social Care in February 2020.

There was already scepticism that these goals could be achieved ahead of the pandemic and they’re now likely to be re-evaluated as a result of the COVID-19 pandemic, as indicated in the Government’s response to a recent House of Lords committee inquiry into the feasibility of the target.­­

To deliver on the UK Government’s manifesto pledge and its renewed focus to “build back better”, ILC argues that urgent action is needed to invest in preventative health interventions, such as vaccinations, screening and early detection of disease, alongside a greater focus on targeting under-served communities most affected by the pandemic.

“Increased longevity is a success story, but the opportunities that stem from this will not be maximised if the extra years are spent in poor health or with increased levels of disability and dependency. Our new report – unfortunately – provides further evidence that the UK’s position in this respect is worsening, with gains in overall years outpacing gains in healthy years.”

“Moreover, the research reinforces the lessons that have been made stark through the course of the pandemic – that socioeconomic inequalities remain prevalent, with the least advantaged members of society suffering from worse outcomes. A key finding here is how the most advantaged have seen improvements while the least advantaged saw little change.”

“As the UK moves into recovery from COVID-19, political pledges to ‘build back better’ will only be fulfilled if policies actively reduce the kinds of inequalities that have grown since the financial crisis over a decade ago.”

“Although the widening inequalities we found are concerning, our project also highlighted that some progress has been made over the 20 year period in respect of the disabling consequences of long-term conditions.”

“So early diagnosis, as well as effective treatment could help older people with long-term conditions slow down the progression of these conditions and reduce their disabling effect.”

The “Making the extra years count: Inequalities in disability and dependency with increasing longevity” report is available from https://ilcuk.org.uk/making-the-extra-years-count/

The ILC is the UK’s specialist think tank on the impact of longevity on society, and what happens next.

Since their inception, they have published over 250 reports, organised over 300 events including the annual Future of Ageing conference.

We work with central government, local government, the private sector, and professional and academic associations in the UK and across the world to provoke conversations and pioneer solutions for a society where everyone can thrive, regardless of age.