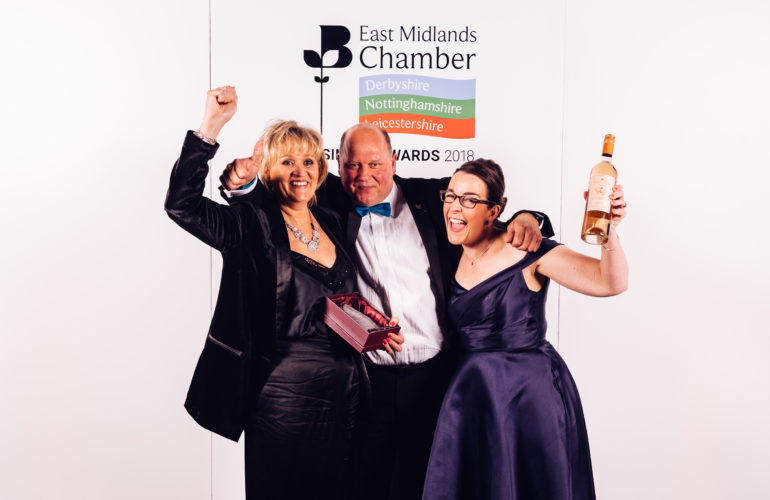 Hope Against Cancer in Leicestershire and Arthur Rank Hospice in Cambridge have won local awards for their work in end of life care and performance as employers.

Cancer research charity Hope Against Cancer has won several awards in the last month. One was presented at the East Midlands Chamber of Commerce Leicestershire Business Awards ceremony, where Hope Against Cancer were given the ‘Community Impact Award’ for demonstrating continued commitment to supporting the local community and the good causes within it.

The second accolade was awarded by the Leicester Mercury Women in Business Awards to the charity’s Corporate & Events Fundraiser Tracy Hallam, who they have named ‘Inspirational Woman of the Year.’ The awards celebrate the success of businesswomen across Leicestershire and the contribution they have made to the local community.

Tracey, who was also nominated for the Contribution to the Community Award, has helped to raise the profile of the work Hope Against Cancer does in funding local cancer research and supporting the people it affects, through organising and managing fundraising events.

“I am determined to ensure that anyone affected by cancer has access to better treatments, through our research. The funds we receive from our fundraising events and generous donations go towards funding vital cancer research locally and supporting our Hope nurse at our clinical trials facility at Leicester Royal Infirmary which we hope will lead to better treatments and ultimately, a world where nobody is affected by cancer. That is what I dream of achieving!”

Additionally Eileen Richards, who is on the charity’s Board of Trustees, won the highest honour of the night; the Businesswoman of the Year Award.

“September really has been a successful month for everyone at Hope, it is a great honour to have received these awards, and it is a testament to the work everyone here does. I would like to say a special well done to Tracey and Eileen on their award wins too, it is exactly the recognition they deserve for their hard work and passion they show in their fields.”

Arthur Rank Hospice has been named one of the best employers in the Eastern region of England thanks to the results of a staff survey.

The Best Employers survey saw 123 members of staff from the hospice take part in the questionnaire, where it scored very highly for team working, patient focus, quality and motivation. It was also noted that facilities for staff had improved dramatically since the hospice moved to its new home in November 2016, and employees ‘feel highly engaged’

A total of 15,000 employees from 140 businesses took part, making it the biggest single snapshot of employee sentiment in the region.  The survey was founded by recruitment agency Pure, and is led by psychometric experts Eras, publishing group Archant, and law firm Birketts, and each year invites employees to have their say on their company’s performance, culture, staff training and engagement levels.

“I was delighted to collect our gold accreditation on behalf of Arthur Rank Hospice and its employees. It is without doubt, the people behind our hospice which makes it the wonderfully warm and welcoming place it is and it is great to receive recognition of this at a regional level.  The presentations and panel discussion at the afternoon provoked some real food for thought as well as some workable ideas I have been able to bring back to the hospice. It was also really helpful to meet other businesses in our region and gain some insight into how our organisation compares in terms of both performance and challenges.”

“Arthur Rank Hospice is an organisation that has adopted a clear set of values and communicates these well, and works at the heart of its community to deliver to its high standards and bring its staff on its journey.”