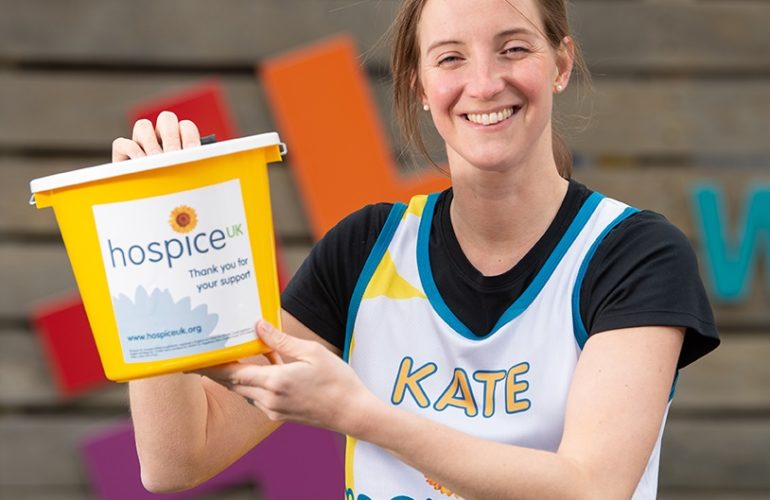 The Virgin Money London Marathon takes place next week, and 189 runners will be racing 26 miles across the capital to raise funds for Hospice UK. Here three runners share their reasons for supporting the charity.

Dr Kate Davies has been working at St Luke’s Hospice in Plymouth since 2011. As well as being a keen runner she is passionate about raising the profile of hospice care and its need for continued funding, which is why she’s found time to train between shifts and family life with her husband and two small children, ready to run the marathon in aid of Hospice UK.

“I was thrilled to get a place to raise funds for Hospice UK” Kate said. “They’re the voice of hospices at national level and work hard to ensure end of life care stays on the agenda.”

“The hospice movement in the UK is still quite young, so this kind of profile raising is really important to help ensure organisations including St Luke’s get the support, development and training they need now and in the future.”

While working in the oncology and haematology team at a local hospital Kate decided she wanted to focus on palliative care. She found it rewarding being part of a team caring for patients with different types of cancer, so when she was offered the opportunity to join St Luke’s, she knew it was where she wanted to be, looking after people affected by the disease as well as those with other terminal conditions.

Since joining the charity, Kate has appreciated the extra time she has to spend with patients, something in short supply on the NHS wards.

“Here, I don’t feel rushed” she says, “when new patients arrive – often fearful coming into the unfamiliar environment of a hospice – I have the time needed to talk things through, find out more about them and help put them at ease.”

“The medical care we give is so important but it’s more than that. It’s very special being part of a team for whom nothing is too much trouble, where every day colleagues go the extra mile, such as arranging a last boat trip for a patient who misses being out on the water.

On running for Hospice UK, she said, “I’m so excited about the day! I’m running for such a great cause and not only will friends be there to cheer me on, my husband Tom is doing the marathon with me, so it’s extra special.”

Kate won’t be the only person from St Luke’s talking part in the Marathon. Also putting his best foot forward is Head of Marketing and Communications Robert Maltby, running in aid of the hospice and Hospice UK.

Ian Webber, from Devon, will be running his 18th consecutive London Marathon, and his eighth in support of Hospice UK.

He ran his first marathon for Hospice UK in 2005, when the charity was called Help the Hospices. Along with his wife, the couple have raised £60,000 for hospice care over the years.

Ian’s reason for choosing Hospice UK is because as the national charity for hospice care, it meant their local hospices in Devon benefit from their fundraising.

“As a Devon runner, knowing that Hospice UK supports the work of our local Children’s Hospice South West, Hospiscare in Exeter, North Devon Hospice, Rowcroft (The Torbay & South Devon Hospice) and St Luke’s Hospice in Plymouth) remains very important, that every penny raised makes a big difference to all the children and adults who need hospice care in our localities” he said.

Rick Perrin is preparing to run his first Marathon in memory of his wife Claire, who was cared for by St Catherine’s Hospice in Crawley, West Sussex.

Claire was admitted to hospital two weeks before Christmas in 2014, while she was pregnant with their first son Bertie. A week after he was born she was diagnosed with stage four cancer.

“As we were told that worse case Claire had three months, and best case she had 18 months, she, strong as ever, turned to me and said, “at least we’ve found out what it is”” Rick says.

“Up until then we hadn’t known what was wrong. I still remember telling our wider family. Breaking that news felt unbearable.”

Claire had chemotherapy among other treatments but she eventually became less well.

“I knew she wanted to stay at home, in the home she loved that we’d renovated together, so her family and I looked after her there. During that time St Catherine’s Hospice nurses visited to offer us expert support. They were amazing. They were just like angels walking into our home. Knowing I had their support was a big relief. It gave me some respite and took a weight off me.”

“The hospice nurses cared for Claire with such dignity. They washed and changed her, and controlled her pain. That was so important to me as I didn’t want her to be in any pain. Nurses were always on the end of the phone, day or night, to offer me advice and support too. And their help meant I knew I was doing the best for my Claire.

“Claire and I were in a situation nobody should ever have to be in. And before she died we had conversations that nobody should ever have to have but I’m glad that I know her wishes for mine and Bertie’s future. Claire was my best friend and my soul mate. We were inseparable. When I lost her, I lost my world, but I’m so grateful I experienced 29 years with such a caring, strong, fun-loving woman. Some people never get to experience the kind of love we did.

“Now, I feel ready to give something back to St Catherine’s, so I’m running the London Marathon. I’m passionate about raising awareness of the hospice’s vital work, and making sure that other people, going through the darkest days they’ll ever face, can have the same amazing care that my wonderful Claire did. I know that’s what she would have wanted.

“If Claire knew I was running my first marathon she’d have said I was partly mad but I know she’d be so, so proud of me. I’ll carry that with me for the whole 26 miles.”