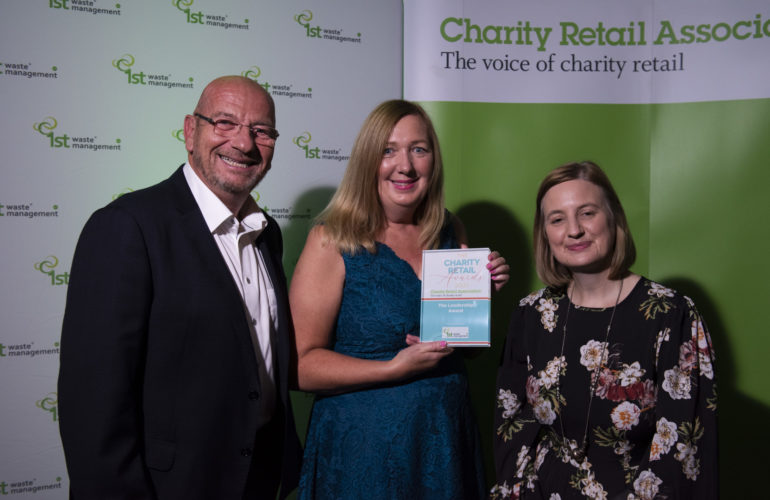 The head of retail at Martin House Children’s Hospice has won the Leadership Award in the Charity Retail Association’s national awards.

Stephanie Rimmington won the top accolade in a ceremony at the CRA’s national conference in Nottingham. Judges praised Stephanie for her ‘clear long-term vision to put retail at the heart of fundraising at Martin House’ and her ‘huge emphasis on staff development’.

Stephanie said: “I’m overwhelmed to have won this award – it was a huge honour just to have been shortlisted, so I’m absolutely thrilled. I feel it’s very much a team award, because I couldn’t do my job without the support from everyone who works in retail at Martin House.”

Martin House has a chain of 12 shops across the region, plus a furniture showroom, raising around £1 million of the nearly £9 million it costs to run the hospice each year.

Beckie Wynne, director of income generation, said: “In what has been the toughest 18 months for charity retail, Stephanie has worked exceptionally hard to make sure her team have hit their fundraising targets.

“When other charities were closing shops due to the pandemic, she pushed ahead with plans to open a new shop in Ripon, and has been tireless in supporting her staff and volunteers through lockdowns, furlough and a huge amount of Covid regulations.

“On top of this, she is incredibly supportive and caring about her staff and their wellbeing. We already knew how amazing Stephanie is, but we’re so pleased this has been recognised at such a prestigious level.”

Martin House cares for babies, children and young people with life-limiting conditions from across West, North and East Yorkshire, providing planned respite, symptom control, end of life care and care after death, along with bereavement support.

“I’m awestruck by the creativity and positivity shown by charity retailers over the past year. The award winners and all those nominated showcase the incredible level of dynamism and innovation within charity retail that has helped the sector weather the storm of the pandemic. It is a remarkable achievement that charity shops sales are currently trending above pre-pandemic levels.”

Martin House’s shops are located throughout West and North Yorkshire. To find your nearest shop, or how to support the hospice, visit www.martinhouse.org.uk.

Pictured: Stephanie Rimmington (centre) receives her award from Mike Nicol of awards sponsor 1st Waste Management and Emma Peake, deputy CEO/director of retail and trading at the Air Ambulance Service Trading and chair of the CRA’s Board.

Martin House has been providing family-led care and support for babies, children and young people with life-limiting conditions for more than 30 years (life-limiting means the child or young person is not expected to live beyond young adulthood).

Every year we support over 420 children and young people, and their families plus more than 150 bereaved families across West, North and East Yorkshire, at our hospice, in hospitals and in families’ own homes.

The hospice, based in Boston Spa, has nine bedrooms in Martin House, and six in Whitby Lodge, which cares for teenagers and young people. Our services include respite stays, symptom control, emergency care, community care and end of life care.

Bereavement support is offered to families, often for two to three years after their child’s death. We also offer bereavement support to families whose child had a life-limiting condition but did not have the opportunity to use the hospice, or following a sudden death.

Martin House hosts one of only three specialist training places in the UK for consultants in paediatric palliative medicine, alongside placements in London (Great Ormond Street Hospital) and Cardiff.

There is no cost to any of the families using our services. It costs nearly £9 million a year to provide this care, the majority of which comes from voluntary donations and fundraising.